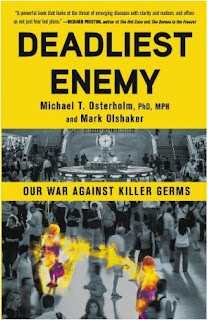 
Although I'm an avid reader, i don't often do book reviews in this blog, although I did so for Maryn McKenna's terrific 2010 book Superbug: The Fatal Menace of MRSA, and for Peter Christian Hall's 2012 pandemic novel American Fever (see It Gives You Fever).

A couple of weeks ago my best friend asked what I'd like for my birthday, and I said without hesitation, a copy of Mike Osterholm's new book; Deadliest Enemy.


So yesterday I celebrated my 63rd curled up with Mike's book, enjoying the narrative, and comforted by the realization I can finally stop worrying about dying tragically young.

So, all in all, it was a pretty good day.


I should state for the record that I've spoken to Mike several times over the years, and he invited me to speak at an H1N1 conference in Minneapolis in the fall of 2009.  Mike and the whole gang at CIDRAP have been very supportive of this humble blogger. Sadly, 2009 was the only time I've actually met Mike in person (so far).

Like many in Flublogia, I admire Mike's willingness to speak bluntly about public health risks, even when it ruffles some feathers (see Osterholm: Time To Close The Pig Barns and Osterholm: What We’re Afraid to Say About Ebola).

As for the book.  Well, there's always a fear when you decide to review a friend's book that it will turn out to be awful. My recourse, not being a book reviewer, is to pretend I didn't read it.  Happily that isn't the case here.


We all have our own personal `lens' through which we see the world around us. After all these years, I still see the world through the eyes of a paramedic, albeit (either tainted or enhanced - you decide) by 12 years of flu blogging .

Your world view depends very much on who you are, and your life's experience.


In this book, you'll see the world through the eyes of an epidemiologist. And it is a fascinating, albeit at times humbling, experience.  While we like to think of ourselves as perched high atop the food chain, and masters of both our planet and our destinies, epidemiologists know better.

We can be felled, at any time, by the smallest and most plentiful of foes; Human pathogens.


And so this book begins by taking us on a grand tour of some of the great epidemiological investigations of the past 30 years - ranging from Toxic Shock Syndrome and HIV from the early 1980s - to SARS early in the last decade -  to our recent outbreaks of MERS, Zika, and Ebola.

Along the way, in addition to picking up knowledge about these events, you find yourself starting to think like an epidemiologist.


After reading Chapter 15 (Mosquitoes: Pubic Health Enemy Number One), you'll find the high pitched whine of a mosquito in your ear suddenly sounds more like the warning wail of a Klaxon, and after finishing chapter 17 on Fighting the Resistance, you'll never take our dwindling armamentarium of effective antibiotics for granted again.


There are also chapters on the omnipresent threat of Bio-terrorism, lab accidents, and the dangers of unrestricted Gain of Function (GOF) and DURC (Dual Use Research of Concern) experimentation.


But the 800 pound gorilla of infectious diseases is an airborne pandemic - and in chapter 19 (Pandemic: From Unspeakable to Inevitable) - Mike walks us through a `table top' simulation of an H7N9 pandemic.

Lest anyone think his description is sensationalized, I've participated in a couple of these tabletops with the CDC - and while bad - this is not a `worst-case' scenario.  It is, in fact, all too plausible.


The book ends with a nine-point  `Battle Plan for Survival', that will require both generous funding and a good deal of political will to bring to fruition.  A tall order, but considering the alternative, a wise (some would say, imperative) investment in mankind's future.


Deadliest Enemy is very well written, always fascinating (at least for disease geeks), and at times provides a deeply personal glimpse into an Epidemiologist's career very well spent. But be warned, you'll find something on nearly every page that will give you pause.