With few exceptions, HPAI has been pretty much a Northern Hemisphere, and occasionally peri-equatorial, threat. Granted, both South Africa and Zimbabwe have reported a few outbreaks of HPAI H5N2 over the years, and Australia reported  HPAI H7N7 in 2012, and HPAI H7N2 in 2013 (see map above).


But widespread outbreaks, particularly those driven by migratory birds, have not been reported.

Surveillance, particularly in Africa and South America, is limited, and so it is likely there have been some outbreaks that have gone unreported. But last week's announcement from the OIE: HPAI H5N8 Confirmed At A Zimbabwe Poultry Farm, is raising fresh alarm bells, particularly in poultry rich country of South Africa. 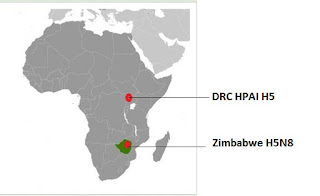 The Department of Agriculture, Forestry and Fisheries’ Veterinary Services was on Friday 02 June 2017 notified of an outbreak of highly pathogenic avian influenza (HPAI, ‘bird flu’) in one of the commercial chicken flocks in Zimbabwe.

The virus has been typed as H5N8. South Africa keeps a close eye on the notifications reported to the World Organisation for Animal Health (OIE) by trade partners.

South Africa immediately suspended all trade in live birds and poultry, meat, table eggs and other unprocessed poultry products and communicated this to the Zimbabwean Chief Veterinary Officer. South Africa imports very little from Zimbabwe. All importers were immediately notified that their import permits were cancelled. Any permits which have not been used should please be returned to the Department with immediate effect.

We have heightened inspections of all consignments, including all private and public vehicles at all our ports of entry, especially in and out of Zimbabwe. The Limpopo Veterinary Authorities are on high alert and have increased their surveillance, especially in backyard chickens. Communities must be extremely vigilant, especially in areas of the Limpopo Province that neighbour Zimbabwe, and report any unusual mortality of chickens or other birds to the State Veterinary Services immediately for samples to be collected.

Keepers of chickens, geese and ducks, including backyard farmers, are encouraged to observe minimum biosecurity measures to prevent this disease in their birds, such as limiting exposure to wild birds by providing feed and water indoors or at least well underneath a low solid roof. Care should be taken to prevent chickens drinking from common water sources where wild birds congregate.

Commercial farmers are also encouraged to increase their biosecurity measures on farms, including limiting access to people who might have had contact with birds and chickens outside the farm. Clinical and serological surveillance should also be increased and any abnormal morbidity and mortalities must be immediately reported to State Veterinary Services.

South Africa has prohibited vaccination of chickens against Notifiable Avian Influenza and no vaccine against this disease is registered in the country. No farmer should allow their chickens to be vaccinated.


The geographical expansion of HPAI H5N8 - starting in South Korea in 2014, moving to North America and Europe during the winter of 2014-15, and this past year invading the Middle East, West Africa, and now Southern Africa - has moved faster and spread farther, than any avian virus we've seen before.


This recently emerged H5N8 virus seems particularly well adapted for carriage by wild and migratory birds, and has spawned a number of reassortants (H5N2, H5N5, H5N9) during its travels.

While it doesn't yet appear well entrenched in the Southern Hemisphere's wild and migratory bird population, this upstart virus has succeeded where others have failed, and arguably needs to be on everyone's radar.

No matter where in the world they live.

Posted by Michael Coston at 8:51 AM