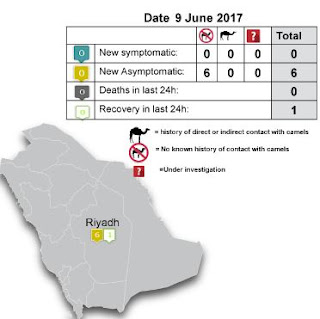 
The Saudi MOH, late in the evening Riyadh time, has posted an update of the ongoing MERS-CoV cluster in Riyadh, adding another 6 asymptomatic HCWs to the list. They join 18 other asymptomatic, and 8 symptomatic cases reported since June 1st across several Riyadh hospitals - according to last night's CIDRAP report.


Since June 1st, Saudi Arabia has reported a total of 34 cases.

We haven't received enough epidemiological information to make sense of what's going on, but this (mostly) nosocomial outbreak is on target to be the biggest MERS cluster we've seen in at least a year.

Asymptomatic cases are reportedly being isolated at home, and are monitored daily by health authorities.

Prior to 2016, the assumption was (based on very limited contact testing by the Saudis), that only about 10% of MERS cases were asymptomatic (or mildly ill). Recently, improved testing suggests that number may be low.

At the urging of WHO (see Sept 2015 WHO Statement On The 10th Meeting Of the IHR Emergency Committee On MERS), the Saudis -  over the past 18 months - have done a much better job testing for asymptomatic cases.

Unknown are how many undetected mild and/or asymptomatic cases there are in the community, and how much of a role - if any - they may play in the spread of the virus.

Posted by Michael Coston at 3:47 PM