With the North American county and state fair season just recently underway, on Monday I wrote  A Reminder About The `Other' Novel Flu Threat, which looked at the risks posed by swine influenza viruses.

Last summer we saw a significant cluster of human infections in the Midwest - all connected to attendance of county fairs -  with a new genotype of the H3N2v virus (see MMWR: Investigation Into H3N2v Outbreak In Ohio & Michigan - Summer 2016).

While human infection with swine influenza generally produce mild or moderate illness, in 2015 the CDC's FluView reported a Fatal Swine Variant (H1N1v) Case In Ohio, and over the winter we looked at two swine flu infections in Europe where patients required extended ECMO support in the ICU.

Prior to that, in September of 2012, after a record outbreak of H3N2v that infected at least 305 people across 10 states, the CDC's MMWR released a report on H3N2v Related Hospitalizations In Ohio – Summer 2012, that looked at 11 patients that required hospitalization, including the nation’s only H3N2v related fatality.


Exactly how many people contract swine variant flu viruses each year is unknown, but a study published in 2013 (see CID Journal: Estimates Of Human Infection From H3N2v (Jul 2011-Apr 2012) - estimated that the number of infections could be 100 to 200 times greater than is reported.

Since county fairs bring millions of people into close contact with livestock, and flu viruses can jump both from pigs-to-humans and from humans-to-pigs (reverse zoonosis), we pay particular attention to reports like the following, which comes out of Clinton, Ohio.

“July 12, a pig at the Clinton County fair tested positive for H3N2, a zoonotic disease that can be transferred between animals and humans,” said Ohio Department of Agriculture (ODA) Spokesman Mark Bruce. “July 13th, additional animals in the barn showed clinical signs of illness and out of an abundance of caution to the general public and Ohio’s livestock population, ODA placed a quarantine on the hog barn. Only exhibitors and their parents were allowed into the building.”


The Clinton County Health Department has issued the following statement:

What to do if you get sick:

“If you have been in contact with swine and are experiencing signs and symptoms of flu-like illness, please consult your medical provider,” said Dr. Terry Holten, Clinton County Health District Medical Director.  “Especially if you are high risk which includes children under 5 years, those with long term health conditions, like asthma and other lung diseases, diabetes, heart disease, weakened immune systems, as well as pregnant women and people 65 years and older.”


The 2009 H1N1 pandemic was caused by a swine variant H1N1 virus that had kicked around swine herds for a decade or more before it adapted well enough to humans to transmit easily in the community.


While pandemic viruses are very rare, we have ample and recent precedent to justify monitoring swine viruses closely. 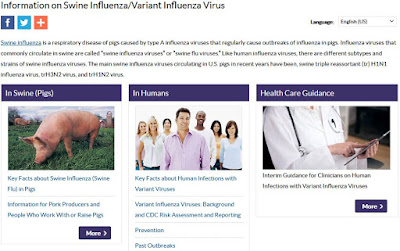 For more on swine as potential `flu factories’, you may wish to revisit: