On Monday, in South Korea: Gochang HPAI H5N6 A New Reassortant Virus, we learned (somewhat cryptically) that South Korea's recent outbreak of H5N6 was not simply a return of last year's Asian-origin virus, but an entirely new reassortment comprised of last year's European H5N8 virus and the NA from a European H3N6.


Today we learn from testing at Tottori University that the virus samples collected two weeks ago from Shimane Prefecture on the east coast of Japan (see Japan: MOE Raises Surveillance Alert Level As More Dead Birds Are Discovered) are a similar reassortant virus.

Not only does this announcement provide us with additional details on these genetic changes - by turning up at locations more than 500km apart within days of each other - it suggests this new reassortant virus may be more than just a flash in the pan. 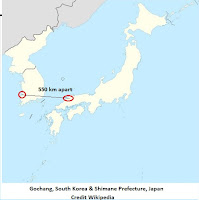 First some (translated) excerpts from the University's press release (bolding mine), then I'll return with a bit more.

In November 2017, the H5N6-type highly pathogenic avian influenza virus was first isolated in this season from the corpse of the Cobb Swan recovered in Shimane Prefecture. As a result of the analysis of the full-length gene of the virus isolated in the university, the virus has been found to be a different virus from last season's domestic strains.

The virus was also a gene re-assembly of the waterfowl-derived N6-type virus, widely distributed in Europe and other popular H5-type viruses in the last season, and was presumed to have invaded the country in the new season. Furthermore, the virus's genes are not likely to infect people directly because mutations that are considered to be involved in the infection to the person reported so far have not been recognized.

In Korea last season, the epidemic of h5n6-type highly pathogenic avian influenza virus spread across the country, totaling 383 cases, and the largest outbreak in the past over 37 million feathers of culled. On the other hand, in Japan, at about the same time, it was confirmed that the outbreak occurred at 12 farms total of 9 road prefectures, and the occurrence of 218 cases, which is the largest in the past, was reported in birds and other countries. This h5n6-type virus It was discovered for the first time in Jiangsu, China in 2013, and it is believed that the next day in 2014, the epidemic spread to Southeast Asian countries such as Viet Nam and Laos, which have already spread widely in China.

On the other hand, in European countries, H5N8-type viruses have been prevalent in countries since 2014, and last season, 23 countries have already been confirmed as Italy and Russia in this season.

On November 5, 2017, in the trachea and total excretion swab specimens taken from the corpse of the Cobb Swan found in Matsue City, Shimane Prefecture, the positive response was observed in the type a influenza simple diagnostic kit, the Ministry of the Environment " It is one of the confirmed diagnostic agencies of avian influenza virus possession survey in birds. At the Center for Epidemiology of Common Infectious Diseases in the University of Tsukuba, the analysis of full-length genes was performed along with the implementation of virus separation, sub-type identification and virulence testing from the same specimen.

The influenza virus gene consists of eight RNAs, called segments, which are called PB1, PB2, PA, HA, NP, NA, M, and NS genes, depending on the major proteins coded by each gene. The eight genetic segments of this separation virus (hereafter Shimane 2017) it was found that the homology of the h5n6-type domestic epidemic strains of last season was 94% or less, and that this virus was a different virus from last season's domestic epidemic strain.

In addition, seven gene segments other than the NA gene of the virus last year showed the highest homology of over 99% with those of H5N8-type viruses prevalent in European countries The NA gene also showed more than 97% homology with those of the N6 virus derived from wild waterfowl widely distributed in Eurasia. From the above, the virus has been found to be a gene re-aggregation virus with the H5-type virus and wild waterfowl-derived n6 virus prevalent in poultry in Europe, etc. Last season.

According to the method prescribed by the OIE (International World Secretariat), as a result of the pathogenic test of the chicken in the intravenous inoculation, since the death was confirmed within 48 hours of all feathers, it has been confirmed that the virus is highly pathogenic avian influenza virus that indicates a high virulence against chickens. In addition, in the experiment of the infection by the nasal inoculation to chickens considered to be close to the natural infection path, with 106 virus shots, all of them died within three days and all of them were left in the 104 inoculation group, and the virus was compared to last season's domestic stock It was considered to be a virus with the same degree of virulence.

When the influenza virus infects cells, the HA protein is adsorbed on the receptor of the cell surface, but it is known that the receptor is different in birds and mammals. The amino acid residues involved in the adsorption of the HA protein in the Shimane 2017 strain on host cells were an array of specificity for bird-type receptors. In the amino acid sequence of other viral proteins, amino acid substitution was not allowed to acquire the infection to mammals and people. In addition, the amino acid substitution involved in the neuraminidase inhibitor resistance was not observed in the NA protein. From the above results, it was estimated that the virus would be less likely to infect people directly.

The gene sequence information of this virus will be released to the international nucleotide sequence database. We will continue to analyze the genetic properties of other domestic isolates and Korea isolates, as well as to analyze the antigenic nature of the virus in detail. We will also clarify the sensitivity, virulence, and propagation power of chickens, ducks, and wild baby animals, etc. The results of these researches are expected to lead to an increase in the future of epidemic forecasting and prevention measures.

One of the questions we've been pondering over the summer is exactly what virus would return to Europe, Asia, and possibly North America with this fall's migration.

The FAO has pegged the emergence and global spread of HPAI H5N8 as the `fourth wave of intercontinental movement of H5 HPAI virus since 2005 - but unlike venerable H5N1 - this new clade (2.3.4.4.) of H5 has proved itself to be highly promiscuous, spinning off scores of genotypes and multiple subtypes as it has spread across Asia and Europe.
Given that the original H5N8 subtype still circulates and interacts with LPAI viruses in Europe, Africa, and Russia - as does Asian H5N6 in China - the genetic diversity of clade 2.3.4.4 H5 is only likely to increase over time.

The good news is that viruses spun off from H5N8 are currently viewed as less likely to infect humans than those with an H5N6 origin.  That said, we've seen a number of lab studies suggesting that H5N8 could potentially pick up mammalian adaptations that could increase its threat to humans.


The bottom line is that avian flu viruses continue to spread and reinvent themselves, and that kind of diversity means we'll have to remain alert for changes to both their genetics, and to their behavior.