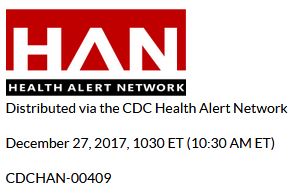 
Although we've been talking about the possibility of seeing an unusually rough flu season this winter since the middle of last summer, we never really know what kind of flu epidemic we will see until it is over in April or May.


Still, the signs are there; increased (and early) H3N2 activity around the country, and concerns that this year's H3N2 vaccine performance may be `suboptimal'  (see ECDC: H3N2 Flu Vaccine Component Likely `Suboptimal').

A week ago, in CDC: Influenza Antiviral Medications - Summary for Clinicians, we looked at the latest recommendations for antiviral treatment (and prophylaxis) of influenza, and hopefully dispelled some of the misinformation about its worth.


Today the CDC has gone one step further in highlighting this year's influenza threat, and the fact that there are medications that can reduce symptoms (and perhaps even be lifesaving), by releasing a formal HAN Health Advisory.

You can sign up for HAN messages, and scores of other CDC and HHS email notifications, by going to the CDC - Quick Subscribe GovDelivery page

While the technical details will e of greatest interest to health care providers, it is imperative that the public knows that those with risk factors should seek early treatment by their doctor whenever infected with the flu.

I've only included a few excerpts from a much longer statement, so follow the link to read it in its entirety.

The Centers for Disease Control and Prevention (CDC) is providing: 1) a notice about increased influenza A(H3N2) activity and its clinical implications; 2) a summary of influenza antiviral drug treatment recommendations; 3) an update about approved treatment drugs and supply this season; and 4) background information for patients about influenza treatment.

In the United States (U.S.), influenza activity has increased significantly over recent weeks with influenza A(H3N2) viruses predominating so far this season. In the past, A(H3N2) virus-predominant influenza seasons have been associated with more hospitalizations and deaths in persons aged 65 years and older and young children compared to other age groups.

CDC expects that VE could be similar this season, should the same A(H3N2) viruses continue to predominate. For this reason, in addition to influenza vaccination for prevention of influenza, the use of antiviral medications for treatment of influenza becomes even more important than usual. The neuraminidase inhibitor (NAI) antiviral medications are most effective in treating influenza and reducing complications when treatment is started early. Evidence from previous influenza seasons suggests that NAI antivirals are underutilized in outpatients and hospitalized patients with influenza who are recommended for treatment.

This CDC Health Advisory is being issued to—
(Continue . . .)

Posted by Michael Coston at 1:09 PM