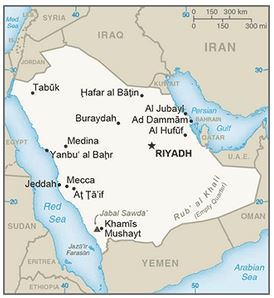 Today Saudi Arabia's MEWA (Ministry of Environment, Water, and Agriculture) announced the detection of Highly Pathogenic H5N8 among birds at a market in Riyadh.

While other Middle Eastern countries (Iran, Israel, Egypt, etc.) have reported HPAI H5N8 over the past year, this is - as far as I can determine - the first outbreak in poultry in KSA.

02/04/1439 (Dec 20th, 2017)
Ministry of Environment and Water and Agriculture announced on Wednesday the injury of a number of birds infected with bird flu (H5N8) in Azizia market in the city of Riyadh, after receiving a communiqué on Tuesday stating cases of deaths of birds, accompanied by respiratory symptoms and nervous.

The ministry indicated that if the receipt of a communication to the Central Chamber of Information and Emergency Ministry of Environment and Water and agriculture benefit significantly mortality of the birds, began veterinary emergency teams in the ministry of injury site and took samples from the infected dead birds and mixing were tested in the laboratory of veterinary diagnostics in Riyadh, it became clear after the existence of a certain disease, injury flu high pathogenic avian (H5N8) in the municipal chickens, turkeys and Bat.kma ministry began direct coordination with the Ministry of the Interior, the Ministry of municipal and rural Affairs, in addition to the Ministry of Health to implement prevention measures and emergency plans for bird flu, and close as Ml market, in addition to imposing a ban on the entry and exit of birds and sold and traded in the market. The ministry confirmed that the World Health Organization (WHO) has not recorded cases of infection in humans from H5N8 type to date, with reference to no expectation of any human cases of this kind.

The ministry indicated that the Central Chamber of Information and emergency works around the clock, and field teams proceed with its follow-up and control, calling breeders and producers of poultry and farm owners and citizens and residents to quickly inform the ministry about any suspected case of the disease through call toll-free central room information and emergency ( 8002470000) on the clock, saying that it will publish periodic reports on the status quo, and the work of the ministry to eradicate the disease.