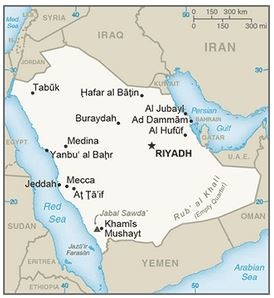 The Saudi Ministry of Environment, Water & Agriculture (MEWA) reports only three new detections of H5N8 in the last 24 hours - all from `Darmaa' province  ( ضرما ) which refers, I believe., to Dhurma - located about 70 km northwest of the Capital of Riyadh.


While a substantial drop from yesterday's 11 cases, the daily numbers have varied greatly in the 17 days since the first outbreak was reported.

First today's report, then a look at a (warning, graphic) video which has sparked controversy overnight on Arabic social media platforms.

20/04/1439
​
The ministry continues in cooperation with the relevant authorities efforts to contain the outbreak of high pathogenic avian influenza (H5N8), the number of new infections confirmed were experimentally infected birds during the twenty-four hours last in the Kingdom (3) injuries in Darmaa province, source of backyard breeding traditional poultry.

Field, continued veterinary teams in the governorates of Al-Kharj and health Darmaa safe disposal of three poultry production projects already announced her own disease and the application of the emergency plan on these projects and procedures surrounding areas.

While the veterinary field teams relay in output and Harimlae and Darmaa and Al-Ahsa and Buraidah Bakeereya and Dawadmi provinces and Hawtat Bani Tamim, safe health to get rid of infected birds in a number of backyard traditional education in the vicinity of the areas that were discovered infection where the procedures and announcements, and the implementation and completion of the emergency plan in those locations.

In the part of the laboratory diagnosis received the ministry laboratories veterinary until this day (2585) sample to be tested for the disease, all completed, and collected samples based on the reports of citizens, and procedures for epidemiological surveillance in the vicinity of the affected areas, as well as non-infected to detect any new disease spots early in the Kingdom different.

The ministry is continuing the application of preventing the movement of live birds without issuing prior transfer authorization procedures, the ministry calls upon the Angel of birds and entrepreneurs commitment to the ministry's decision to prevent movement between areas only prior permission from the ministry, according to what has been previously announced, it will be applied to what is stated in materials (51.52) of the Implementing Regulations of livestock issued by Royal decree (No. m / 13), and dated 10/3/1424 against the violators of the decision to ban the movement of live birds.

In the part of veterinary awareness and guidance ministry is still continuing its awareness of high pathogenic avian influenza (H5N8) in the markets and communities in all regions of the Kingdom.


The culling of thousands of birds - while sometimes necessary - is never simple, pleasant to do, or easy to watch being done.


We've discussed the debate over Humane Methods Of Depopulating Infected Chickens on several occasions, including the controversial use of Ventilator Shutdown As A Poultry Depopulation Method.


While there are no `good' solutions, some methods are less bad than others.

From this video, it isn't clear what other options were made available to the cullers, but it has nonetheless sparked the wrath of the public, and the following report in the Arabic media on MEWA's quick response.

The Ministry of Environment, Water and Agriculture issued a statement on the videos circulating about some of the workers in the health teams from the hotbeds of bird flu.

"Referring to the passages circulating through the social media, some of the workers in the health teams show the hot spots of bird flu 15018! They are getting rid of birds. The ministry confirms that it is a shameful and unfortunate thing, and in violation of the principles of legality and animal welfare systems.

Over the past few hours, the place has been identified, and it appears that the birds are being mistreated, and accordingly, all of them have been checked for work, submitted for investigation and animal welfare systems have been established.

The Ministry stresses that it does not reflect the efforts of the ministry to get rid of the hotbeds of infection "or safe and safe disposal of birds in the hot spots
She also stressed that she would tighten her control over the workers to make sure that it did not happen again.