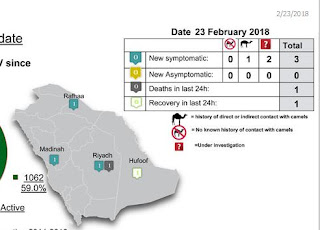 
The intermittent and belated MERS updates from the Saudi MOH - which began in late January - continue today with the posting overnight of the 9th and 10th update of the month (Feb 21st & 23rd).


Since January 29th, 17 days have not seen updates. During this time we've also seen at least two cases mentioned on their Arabic list, that do not appear on the English list.

Since some of the days this month that have been posted (see below) show no new cases, deaths or recoveries, the reasons behind the sporadic nature of these postings remains unclear. 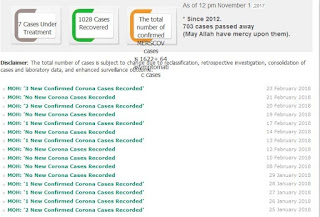 Today however we get a report for February 23rd announcing 3 new cases, including 1 case contact (F,45) of a patient from Rafhaa who was listed with `indirect camel contact' on the 17th, a new primary case (61, M) with no known exposure history from Madinah, and an already deceased 75 y.o. male from Riyadh with recent camel contact. 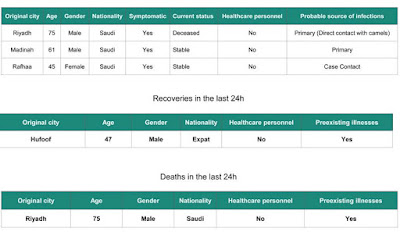 Whenever we see a report showing a new case already expired we have to wonder whether this indicates a delay in reporting or in diagnosis. Early diagnosis and isolation are critical - particularly in a hospital environment - to prevent further spread of the virus.


While the Saudis have done a much better job the past couple of years preventing, or limiting, large nosocomial outbreaks, HCW and hospital patient infections continue to be reported.

Hopefully we'll see a return of more consistent reporting from the MOH, and an update soon from the WHO that can help us sort out the inconsistencies between the English and Arabic language reports.