After nearly a month of intermittent reporting from the Saudi MOH, over the past two days we've seen 3 daily updates posted (23rd, 24th & 25th), informing us of 6 new MERS cases.


You can view yesterday's report, and a recap of February's missing updates, in Saudi MOH Announces 3 MERS Cases, 1 Fatal.

Today's report comes with a bit of a mystery, as it contains the reported death of a 15 year old female from Riyadh - one without preexisting illness -  who doesn't appear to have been previously reported as infected.


At least, not among the English language reports posted by the MOH (see Saudi MOH: Mismatching MERS Reports).

Also a bit unusual, MERS infections are rare in people under the age of 20, and are generally mild when they do occur.  According to the WHO demographic chart below, since 2012 there have been no fatalities reported among cases 19 years or younger. 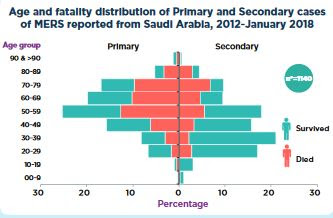 The details on these two updates follow, after which I'll return with a postscript. 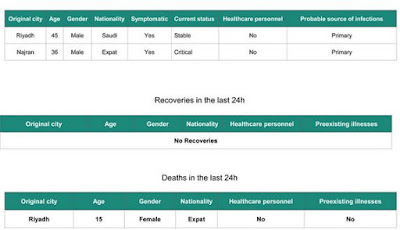 Given the sporadic nature of reporting from the Saudi MOH this month it is difficult to draw any conclusions regarding current MERS activity in Saudi Arabia.


That said, there does appear to have been an uptick in the number of primary (no known healthcare or camel exposure) MERS cases being reported in and around Riyadh.

Hopefully this weekend's back-to-back reporting of three days worth of MERS cases from the MOH is a sign that whatever barriers there have been to posting reports this month has been overcome.

Posted by Michael Coston at 7:53 AM