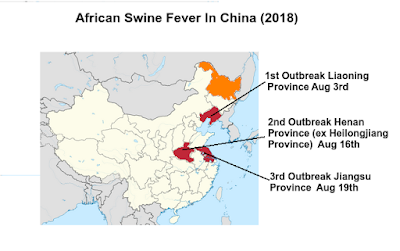 While long anticipated (see March 2018 FAO Risk Assessment), the arrival of African Swine Fever (ASF) to China for the first time earlier this month has set off alarm bells in China's pig industry, and around the world.  The opening paragraph to the March report summarizes the situation:


China is home to around half global hog population and the highest per capita consumption of pork and pork products (FAOSTAT, 2014). An incursion of ASF into China would therefore have devastating consequences for animal health, food safety, and food security, with the possibility of further spread to South East Asia and the Korean Peninsula.

Despite the declaration of a national response by the Chinese MOA,
we've seen two more outbreaks reported over the past 3 days, involving 3 additional provinces (see map above).

Today's announcement from China's MOA (below) offers only the barest of details, and raises questions over how long this devastating animal disease may have been circulating undetected for it to show up - almost simultaneously -  in 4 Chinese provinces.

After the outbreak, the Ministry of Agriculture and Rural immediately sent a steering group to Jiangsu. Haizhou District, Lianyungang City, Jiangsu Province, has been in accordance with the requirements, launched the emergency response mechanism, to take the blockade, culling, decontamination and disposal measures for treatment, disinfection, pigs and prohibit all susceptible animals and products into or out of the blockade zone. Currently, the outbreaks has been effectively controlled.


In 2013, in Shanghai Govt.: Thousands Of Dead Pigs Retrieved From River, we saw the unexplained wholesale dumping of diseased pigs into local rivers by farmers.

As we've seen in the past with diseased poultry, sometimes farmers and local officials have elected not to follow notification procedures, preferring to quietly dispose of the problem under the cover of darkness instead.


It is possible that ASF has been in China for some time, but has only recently been identified by testing, which may mean the virus has had time to become well entrenched in commercial pigs, wild boar, or both.

The impact of endemic ASF in Chinese swine should not be underestimated, even though it is not a zoonotic disease.  China relies heavily on pork production to feed their 1.3 billion people, and backyard swine are an important part of many individual's livelihood.

In 2017, in Iran: Bird Flu, Food Insecurity & Civil Unrest, we saw the result of massive poultry culling, an egg shortage, and a 40%+ increase in poultry prices in Iran.  A societal response that the Chinese government would not want to see duplicated in their country. 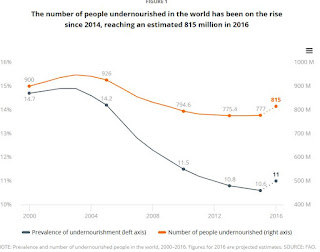 AFTER A PROLONGED DECLINE, WORLD  HUNGER APPEARS TO BE ON THE RISE AGAIN

Similarly, while the prevalence of undernourishment is  projected to have increased to an estimated 11 percent in 2016, this is still well below the level of a decade ago. Nonetheless, the recent increase is cause for great concern and poses a significant challenge for international commitments to end hunger by 2030.


Add in the shifting monsoon patterns in South Asia (including Tibet), droughts, floods, and increasingly erratic climatic changes, and you have a recipe for greatly increased stress on the world's fragile food supply.

All of which makes the spread of ASF in Europe, Russia, and now China - even though it doesn't infect humans - a looming, and potentially serious, public health concern.

Posted by Michael Coston at 7:58 AM