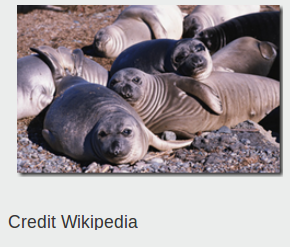 
For the past few days the discovery of an unusual number of stranded, sick, and far-too-often dead seals along the coastline of Maine and New Hampshire has been in the news.


While there are a great many possible causes - ranging from toxic algae, to poor food availability, to other environmental threats -  infectious diseases such as influenza (either novel or human) or phocine distemper virus must be considered as well.

There is precedence. Seven years ago, seals in Maine were struck by a particularly virulent form of H3N8 avian flu (see New England Seal Deaths Tied to H3N8 Flu Virus) that was eventually determined to have acquired worrisome mammalian adaptations.


Based on full genome sequencing and phylogenetic analysis, seal H3N8 descended from an avian strain that has been circulating in North American waterfowl since 2002, which implies recent transmission from wild birds to seals.

Accordingly, seal H3N8 has acquired the ability to bind sialic acid receptors that are commonly found in the mammalian respiratory tract. Mutations in the HA and PB2 genes – required for cell entry and replication, respectively – suggest enhanced virulence and transmission in mammals, but these putative attributes require further investigation. Given these findings along with the long history of the spread of avian influenza to humans—most notably H1N1 and H5N1—seal H3N8 could pose a threat to public health.


Seal outbreaks are of of particular interest since they've often involved influenza subtypes (H7N7, H3N8, H10N7, H1N1) that have infected humans in the past. A few other examples include:
For now, influenza is just one of a long list of possible causes for this die off which are being investigated.  As the statement below from the NOAA Fisheries Greater Atlantic Region indicates, it may be a week or longer before we get any answers.


Until a cause is identified, people (and their pets) are urged to stay a safe distance from any sick, or dead, marine mammals and to report them to authorities immediately.

After the press release, I'll return with more on the 2011 H3N8 outbreak in seals, which has continued to fuel research long after that outbreak ended.

An increase in both live and dead stranded harbor seals and gray seals continues along the coasts of Southern Maine, New Hampshire, and northern Massachusetts, with spikes in strandings over the last week. Currently more than 280+ seals have stranded live or dead in the region since June 1, 2018. Live seals are presenting in poor body condition with clinical signs of lethargy, coughing, sneezing, and seizing.

The response team, with input from the experts, is taking a tiered approach relying on pathology and epidemiology to guide the direction additional analyses may need to go as we rule in or out physical, chemical or biological factors that may be contributing to or causing these mortalities.

Many of the carcasses have been moderately to severely decomposed, which significantly reduces the ability to perform many analyses. Some sample analyses are not possible given the decomposition of the carcasses.

Further evaluations will continue over the next several weeks to months as new animals are found or new evidence determines the direction of the investigation. These rigorous investigations may take several more months to complete. However, NOAA and its federal and non-governmental partners will make every effort to make these data available to the public as soon as possible.

Samples from seals have been collected throughout the summer, and will continue to be collected as new cases are documented.They will be tested for possible pathogens that have caused seal die-offs in the past, including avian influenza, phocine distemper virus, and harmful algal blooms.

If you see a sick or injured seal, please call the NOAA hotline: 866-755-NOAA (6622). Please be patient, as the stranding response teams are very busy!

For your safety and theirs, do not touch a stranded seal, don’t allow pets to approach the seal, and observe the animal from a safe distance of 100 yards.


While strictly precautionary at this point, the advice to stay 100 yards away from sick, or stranded seals is well founded, particularly given some of the attributes of the last flu virus to attack New England harbor seals; H3N8.

A version of H3N8 is thought to have sparked the 1900 influenza pandemic, and is considered likely to return someday (see Are Influenza Pandemic Viruses Members Of An Exclusive Club?), so the appearance of any `avian H3N8' bearing significant mammalian adaptations is understandably of interest. 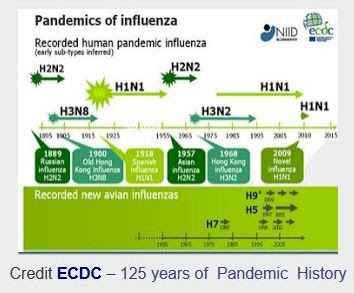 NOTE: There is considerable debate over these pre-1918 influenza pandemics, with conflicting views over whether the 1890-93 `Russian flu’ was due to the H2N2, H3N2, or H3N8 virus, but with most attributing the 1900 outbreak to H3N8 (see Transmissibility and geographic spread of the 1889 influenza pandemic).


Until it appeared in New England seals in 2011, this H3N8 strain was strictly an avian adapted virus. That is, that it bound preferentially to the kind of receptor cells commonly found in the digestive and respiratory tracts of birds; alpha 2,3 receptor cells.


In 2012, in mBio: A Mammalian Adapted H3N8 In Seals, we saw evidence that that particular avian virus had recently adapted to better bind to alpha 2,6 receptor cells; the type that line the surfaces of the human upper respiratory system.

Additional research, published that year (see Nature Comms: Respiratory Transmission of Avian H3N8 In Ferrets), confirmed that this `virus has an increased affinity for mammalian receptors, transmits via respiratory droplets in ferrets and replicates in human lung cells.’

These findings set off some alarm bells, as seals were suddenly on the radar as potential `mixing vessels’ for influenza, much in the same way as pigs have been viewed for years. 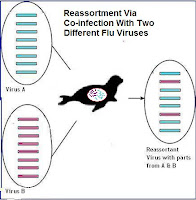 Fast forward 3 years (Sept 2014) and we saw another study (see  Nature Communications: Respiratory Transmission of Avian H3N8 In Ferrets)
that found this seal H3N8 virus was not only well adapted to mammalian hosts, that it could also be easily transmitted between ferrets via the respiratory route.

This prompted the following press release from the USGS, which took part in the above study:

The avian flu virus that caused widespread harbor seal deaths in 2011 can easily spread to and infect other mammals and potentially humans.

A new study by the U.S. Geological Survey and St. Jude Children’s Research Hospital shows that the avian influenza H3N8 strain that infected New England harbor seals could be transmitted to other mammals through the air without physical contact. Transmission by respiratory droplets through coughing, for example, is the main way influenza viruses spread among people. The study also showed that current seasonal flu vaccines do not protect against this seal virus, meaning a new vaccine would be necessary if there ever was an outbreak in humans.


It should be noted that a more recent study in 2016 (see Sci Rpts: Receptor Cell Binding Of Seal H3N8) rolled back some these concerns due to finding limited binding to cells in the human trachea (as opposed to deep lung tissues), but concerns over the future evolution and mammalian adaptation of H3N8 remain.


While we look primarily at birds and pigs as the most likely source of the next flu pandemic, in truth, there are dozens of species out there carrying novel flu viruses, and while probably a long shot - many of those could potentially make the jump to humans.

A few past blogs on some these `outlier' flu hosts include:

Back To The Bat Cave: More Influenza In Bats