Two summers ago (June 2016) the CDC issued a Clinical Alert to U.S. Health care facilities about the Global Emergence of Invasive Infections Caused by the Multidrug-Resistant Yeast Candida auris.


C. auris is an emerging fungal pathogen that was first isolated in Japan in 2009. It was initially found in the discharge from a patient's external ear (hence the name `auris').  Retrospective analysis has traced this fungal infection back over 20 years.

Since then the CDC and public health entities have been monitoring an increasing number of cases (and hospital clusters) in the United States and abroad, generally involving bloodstream infections, wound infections or otitis.

Adding to the concern:
Yesterday the ASM journal mBio published an Observation on this emerging pathogen, which finds the body's normal defenses against fungal infections aren't as effective against C. auris, which may explain its recent spread.


For those puzzled by the use of a Zebrafish larval animal model in this study, Zebrafish share about 70% of human genes, and are susceptible to many human diseases. Their many benefits are described in the NIH Intramural Blog Why Use Zebrafish to Study Human Diseases?.

I've only excerpted the Abstract below, follow the link to read the report in its entirety.

Candida auris has recently emerged as the first fungal pathogen to cause a global public health threat. The reason this species is causing hospital-associated outbreaks of invasive candidiasis with high mortality is unknown. In this study, we examine the interaction of C. auris with neutrophils, leukocytes critical for control of invasive fungal infections. We show that human neutrophils do not effectively kill C. auris.

Imaging of neutrophils in a zebrafish larval model of invasive candidiasis revealed the recruitment of approximately 50% fewer neutrophils in response to C. auris compared to C. albicans. Upon encounter with C. albicans in the zebrafish hindbrain, neutrophils produced clouds of histones, suggesting the formation of NETs.

These structures were not observed in C. auris infection. Evasion of neutrophil attack and innate immunity offers an explanation for the virulence of this pathogen.

IMPORTANCE The emerging fungal pathogen Candida auris has produced numerous outbreaks of invasive disease in hospitals worldwide. Why this species causes deadly disease is unknown. Our findings reveal a failure of neutrophils to kill C. auris compared to the most commonly encountered Candida species, C. albicans. While neutrophils produce neutrophil extracellular traps (NETs) upon encounter with C. albicans, these antimicrobial structures are not formed in response to C. auris.

Using human neutrophils and a zebrafish model of invasive candidiasis, we show that C. auris poorly recruits neutrophils and evades immune attack. Identification of this impaired innate immune response to C. auris sheds light on the dismal outcomes for patients with invasive disease.

The CDC recently updated their C. Auris surveillance page, where they show - as of July 31th  - 360 confirmed cases and 30 probable cases, across 11 states. 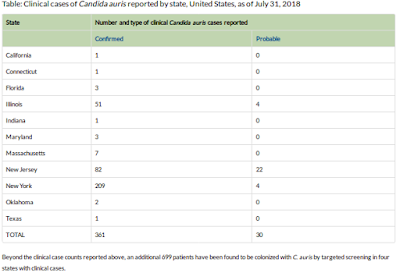 Additionally, based on targeted screening in just four of the states which have reported clinical cases, the CDC reports an additional 699 patients have been discovered to be asymptomatically colonized with C. auris.

While the numbers remain relatively small, they are undoubtedly under reported, both here in the United States, and around the world.  From the latest CDC update: 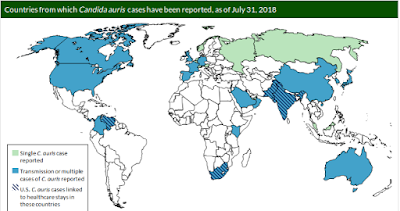 For more, you may wish to revisit some of these earlier blogs:


Notes from the Field: Surveillance for Candida auris — Colombia, September 2016–May 2017)