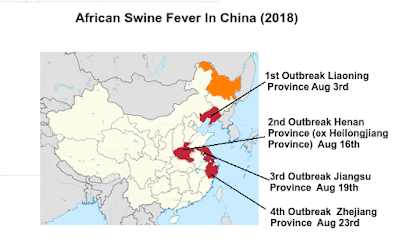 
For the 4th time - and in the 4th Province - in the past three weeks, we're informed by the Chinese Ministry of Agriculture of an outbreak of ASF (African Swine Fever).  A fifth province (Heilongjiang in orange) appears to be the source of  the Henan outbreak.  You'll find earlier reports here, here, and here.


While its arrival has been long feared (see March 2018 FAO Risk Assessment), the discovery of African Swine Fever in Chinese pig herds this month has set off alarm bells in China's pig industry, the Chinese MOA, and around the world.

Two days ago, Science Magazine published an article which sums up the situation.

A nightmare is unfolding for animal health experts: African swine fever (ASF), a highly contagious, often fatal disease of domestic pigs and wild boars, has appeared in China, the world’s largest pork producer. As of today, ASF has been reported at sites in four provinces in China’s northeast, thousands of kilometers apart. Containing the disease in a population of more than 430 million hogs, many raised in smallholder farmyards with minimal biosecurity, could be a monumental challenge.


Today's brief announcement from the MOA - the third such in the past week - is another sign that ASF has already gotten a foothold in China's swine industry.

After the outbreak, the Ministry of Agriculture and Rural immediately sent a steering group to Zhejiang. Local per request, launched the emergency response mechanism, to take the blockade, culling, decontamination and disposal measures for treatment, disinfection, pigs and prohibit all susceptible animals and products into or out of the blockade zone. Currently, the outbreaks had been effectively disposed of.

Although Zhejiang Province lies adjacent to Jiangsu Province (which reported an outbreak 4 days ago), Yueqing City, and Wenzhou, are in the south coastal region of the province -  roughly 500 miles south of the Jiangsu outbreak reported on Sunday.


Wild boar have been linked to the continual spread of ASF in Eastern Europe and across Russia, but the appearance of this virus - almost simultaneously - in 5 different provinces across a wide swath of North Eastern China, suggests some other mode of introduction may be involved.

Yesterday Japan Suspended Chinese Pork Imports - including heat-treated rice straw (used for pig bedding) - in an attempt to avoid a similar fate.  Actions such as these by other nations are likely as China's ASF problems grow.

While not posing a direct health threat to humans, ASF -  should it spread widely in China- has the potential to impact millions of lives. Pig production is a major source of income and financial security for many Chinese families and small businesses, and pork provides an important source of food protein for millions of Chinese.


Although comparisons are difficult to make, last December, in Iran: Bird Flu, Food Insecurity & Civil Unrest, we saw the societal response to massive poultry culling, an egg shortage, and a 40%+ increase in poultry prices in Iran.

As the global population increases, and we face increasingly hostile climatic changes, anything that disrupts food production is likely to have a major impact; on lives, on economies, and even on political stability.

All of which gives the spread of ASF in China, and its encroachment into Western Europe, major public health implications, and makes it worthy of our attention.

Posted by Michael Coston at 7:55 AM