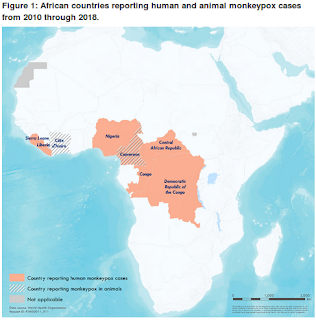 
In the fall of 2017, Nigeria saw their first confirmed Monkeypox outbreak in nearly 40 years, resulting in more than 220 confirmed and suspected cases - and 6 deaths - by February of this year.


The outbreak appeared nearly over last winter, but Nigeria - while no longer issuing regular situation reports - continued to detect a few scattered cases throughout the spring and summer.

Monkeypox was thrust back into the headlines in early September when two Monkeypox infected travelers from Nigeria - with no apparent connection to each other - arrived in the UK (see Eurosurveillance Rapid Comms: Two cases of Monkeypox imported to the UK).


While these were the first two imported cases to the UK, 9 days ago - in UK PHE Confirms 3rd Monkeypox Case - Hospital Acquired HCW - the UK announced their first (and so far, only) locally acquired case.

While far from benign, Monkeypox - particularly the West African clade - isn't quite the imminent pandemic threat that social media and the tabloid press have  portrayed these past few weeks.
The more virulent Central African (aka `Congo Basin') clade is commonly found in the DRC and the CAR - where outbreaks have been on the rise for years (see here and here) - presumably because smallpox vaccinations (which provided up to 85% protection) were halted in the late 1970s.

A 2016 study (see EID Journal:Extended H-2-H Transmission during a Monkeypox Outbreak) looked at a large 2013 outbreak of Monkeypox in the DRC and suggested that the virus's epidemiological characteristics may be changing (possibly due to the waning smallpox vaccine derived immunity in the community).


The DRC had reported a 600% increase in cases over both 2011, and 2012.  The authors also cite a higher attack rate, longer chains of infection, and more pronounced community spread than have earlier reports.


Small genetic changes could favor adaptation to a human host, and this potential is greatest for pathogens with moderate transmission rates (such as MPXV) (40). The ability to spread rapidly and efficiently from human to human could enhance spread by travelers to new regions.

The recent trajectory of the Monkeypox virus is concerning, but for now outbreaks in Africa remain small and exported cases extraordinarily rare. In its current form, at least - it doesn't quite appear ready for prime time.


That, of course, could change.  Which is why we pay such close attention to it, and many other emerging infectious diseases.

All of which brings us to today's update and risk assessment from the World Health Organization.

On 26 September 2017, WHO was alerted to a suspected outbreak of monkeypox in Yenagoa Local Government Area (LGA) in Bayelsa State, Nigeria. The index cluster was reported in a family. All of whom developed similar symptoms of fever and generalized skin rash over a period of four weeks. Epidemiological investigations into the cluster show that all infected cases had a contact with monkey about a month prior to onset.

In 2018, a total of 76 cases have been reported, 37 are confirmed, one probable and two deaths. These cases were reported in 14 states and one territory (Abia, Akwa-Ibom, Anambra, Bayelsa, Cross River, Delta, Edo, Enugu, Imo, Lagos, Nasarawa, Oyo, Plateau and Rivers and the Federal Capital Territory (FCT)).

Genetic sequencing suggests multiple introductions of the monkeypox virus (MPXV) into the population with evidence of human to human transmission. The isolates are closely related to the West African, Nigerian 1971 strain.

The Federal Ministry of Health through the Nigeria Centre for Disease Control (NCDC) in collaboration with the State’s Ministry of Health and WHO are investigating suspected cases and monitoring contacts. Enhanced surveillance is ongoing in all states especially in the most affected states and in the FCT. In addition, a national interim monkeypox guideline has been reviewed and a regional monkeypox training is scheduled to commence in October 2018.

Animal surveillance will commence in October 2018 in collaboration with the United States Centers for Disease Control and Prevention. This will begin with a training in a wild life sanctuary and subsequently in some affected states.

Monkeypox is a sylvatic zoonosis with incidental human infections that occur sporadically in the rain forests of Central and West Africa. It is caused by the MPXV and belongs to the Orthopoxvirus family, the same group of viruses as smallpox.

Two distinct MPXV clades exist; the Congo Basin and West African. There are differences in human pathogenicity between these two clades in clinical presentation and epidemiological characteristics. The animal reservoir remains unknown, however, evidence suggests that native African rodents may be potential sources.

Direct contact with affected live and dead animals through hunting and consumption of bush meat are presumed drivers of human infection. The disease is self-limiting with symptoms usually resolving spontaneously within 14–21 days. Severe cases occur more commonly among children and are related to the extent of virus exposure, patient health status and severity of complications. The case fatality rate has varied widely between epidemics but has been between 1–10% in documented events. There is no specific treatment or vaccine for the MPXV infection.

Residents and travellers to endemic areas/ countries should avoid contact with sick, dead or live animals that could harbor MPXV (such as rodents, marsupials, and primates) and should refrain from eating or handling bush meat. The importance of hand hygiene using soap and water or alcohol-based sanitizer should be emphasized. Any illness during travel or upon return should be reported to a health professional, including information about all recent travel and immunization history.

Samples taken from people and animals with suspected MPXV infection should be handled by trained staff working in suitably equipped laboratories.

WHO does not recommend any restriction for travel to and trade with Nigeria based on available information at this point in time.

For more information on Monkeypox: WHO factsheet on monkeypox

Posted by Michael Coston at 6:48 AM