Nature: Bat Influenza Receptors In Other Mammals (Including Humans) 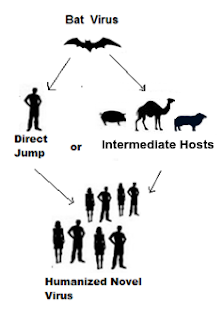 Exactly 7 years ago today (Feb 27, 2012) we looked at an announcement from scientists from the U.S. CDC and the Universidad del Valle in Guatemala City of the first identification of an influenza virus in bats; specifically yellow-shouldered bats (Sturnira lilium) captured at two locations in Guatemala (see A New Flu Comes Up To Bat).


This new influenza virus was described as deviating from the 16 known HAs and was designated as H17. The neuraminidase (NA), and internal genes, were also highly divergent from previously known influenzas.

The good news was that these bat flu viruses did not bind to the same type of receptor cells as regular H1- H16 flu viruses - sialic acid - limiting their threat to humans. The CDC addressed the slim potential for these viruses posing a public health threat in their Bat Flu FAQ.

How could bat flu viruses become capable of infecting and spreading among humans?

Since the discovery of bat flu, at least one study has been conducted to assess the possibility of reassortment events occurring between bat flu and other flu viruses (3). So far, the results of these studies continue to indicate that bat flu viruses are very unlikely to reassort with other flu viruses to create new and potentially more infectious or dangerous viruses. In their current form bat flu viruses do not appear to pose a threat to human health.

Taking a different tack, last April in Back To The Bat Cave: More Influenza In Bats, we looked at new study, published in the Virology Journal, that found that bat receptor cells - while not ideally suited for human influenza viruses - appear somewhat better suited for avian flu viruses.

Last week, an article appeared in the journal Nature that finds bat influenzas bind to MHC-II proteins, which can be found on the surface of a number of important immune cells.


Immune cells that exist in other mammalian hosts, including humans, opening the door for potential cross-species transmission of these viruses.

This is a lengthy, and highly technical, report.  Luckily, following the abstract we have we have a far more easily digested article, published yesterday in The Conversation.

Expression of MHC-II from different bat species, pigs, mice or chickens also conferred susceptibility to infection. Notably, the infection of mice with bat influenza A virus resulted in robust virus replication in the upper respiratory tract, whereas mice deficient for MHC-II were resistant. Collectively, our data identify MHC-II as a crucial entry mediator for bat influenza A viruses in multiple species, which permits a broad vertebrate tropism.


Our data uncover MHC-II as an entry mediator for bat IAVs, which identifies a critical molecular determinant of tropism for these newly identified viruses. Similar to conventional IAVs, bat IAVs are promiscuous in that they use a widely expressed and highly conserved entry factor found in many vertebrates—including humans, and livestock routinely contacted by humans. Zoonotic potential for these bat viruses cannot, therefore, be excluded.

From The Conversation, a summary by Muhammad Munir, Lecturer in Molecular Virology, Lancaster University.   Due to its length, I've only included some excerpts, so follow the link to read it in its entirety.

Bat flu can spread to humans: should we be worried?

MHC-II proteins are found on the surface of certain immune cells, and they play an important role in discriminating the body’s own structures from pathogens, such as bacteria and viruses.

Because pigs and chickens are able to transmit conventional flu viruses to humans, researchers over-expressed MHC-II proteins from pigs and chickens into human cells. These hybrid cells became susceptible to bat flu, which suggests that the virus could infect chicken and pigs.

Because of the role farm animals play in transmitting flu to humans, it appeared that the bat flu virus has the potential to either infect humans directly or by first infecting other animals. But given the limited understanding of MHC-II in bats, the biological role of the protein in transmitting bat flu remains obscure and is yet to be investigated.

We don’t know whether humans have been infected with bat flu in the past, but this research suggests that it is possible. The finding that MHC-II expression in the respiratory tract cells lets bat flu replicate, suggests that the virus could be transmitted to humans through the air. And given the presence of MHC-II receptors in different organs, the bat flu viruses could be spread by bat saliva, urine or faeces. This route of transmission is more likely because of increasing bat-human contact.

Like swine and bird flu, bat-borne flu viruses are widely prevalent around the globe and the newly identified route of entry is common in many farm animals, so the risk of bat flu infecting humans and livestock is probably high.

Importantly, because of increasing human contacts with wildlife, including bats, consumption of bat “bushmeat” and hunting bats for both food and money has exposed humans to the zoonotic spillover of viruses. In these events, the interaction of bat flu with MHC-II could potentially remove these important immune molecules and put people and animals at risk of other viral and bacterial infections, too.


The past couple of decades have turned out to be busy ones for Chiroptologists. For some more bat-related blogs, you may wish to revisit:

Posted by Michael Coston at 7:15 AM