To put that into some kind  perspective, the number of cases reported over the past 6 days already equals or exceeds any KSA monthly total during 2018.

Of the 7 new hospital-acquired infections, 5 are listed as being in home isolation, which usually indicates an asymptomatic, or possibly mildly symptomatic, contact of a known case who has tested positive for the virus.

But, as we saw last Tuesday, cases placed in home isolation are sometimes later moved to a hospital as their situation changes. Although it isn't stated, it seems likely - based on their ages - that a number of these hospital-acquired cases are among health care workers. 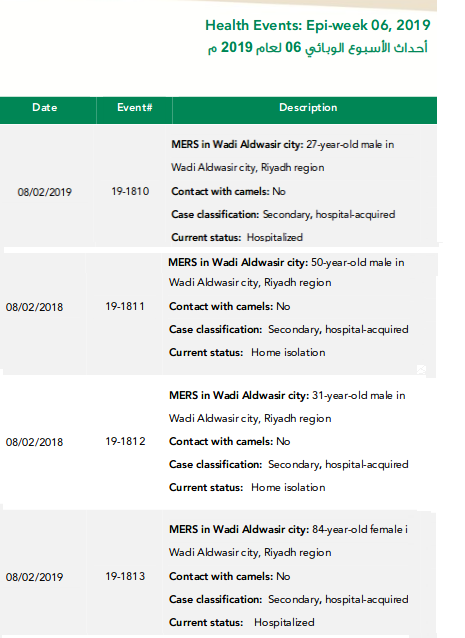 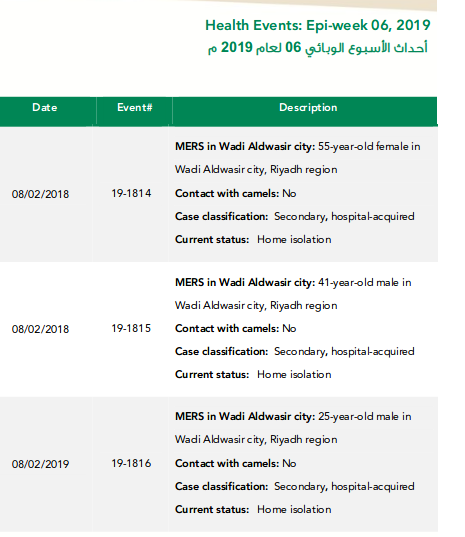 In addition to two other patients described as having recent camel contact - the MOH has reported 3 different clusters of cases in Wadi Aldwasir.
Since the start of 2019, Saudi Arabia has reported 40 MERS cases, which includes 7 clusters (household, healthcare, and community). Oman has reported 5 cases.


For some recent blogs on the concerns over community transmission of the MERS virus, you may wish to revisit:


J. Korean Med Sci: Atypical Presentation Of A MERS Case In A Returning Traveler From Kuwait

A Pandemic Risk Assessment Of MERS-CoV In Saudi Arabia)