WHO: IHR Committee Decides Ebola Outbreak In The DRC Is Not Currently A PHEIC 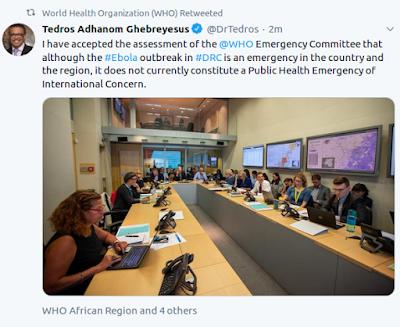 
In a press conference (which is still ongoing) the WHO's IHR Committee has announced their decision not to designate the Ebola outbreak in the DRC as a PHEIC (Public Health Emergency of International Concern).

This is the third time (see HERE and HERE) that the IHR Committee has met on Ebola in the DRC since the current outbreak began last August, and the third time the committee has declined to elevate the crisis to a PHEIC.
The bar for declaring a PHEIC is purposefully set pretty high, as invoking one does have some down sides, particularly in regards to travel and trade for an affected region.


That said, this decision is going to be highly controversial, since many observers fear the situation is worsening on the ground in the DRC.

The WHO has emailed the IHR Committee's statement to journalists (excerpts  below), and I'll add the link on the WHO website when it goes live.

The meeting of the Emergency Committee convened by the WHO Director-General under the International Health Regulations (IHR) (2005) regarding Ebola virus disease in the Democratic Republic of the Congo (DRC) took place on Friday, 14 June 2019, from 12:00 to 17:00 Geneva time (CEST).

The Committee expressed its deep concern about the ongoing outbreak, which, despite some positive epidemiological trends, especially in the epicentres of Butembo and Katwa, shows that the extension and/or reinfection of disease in other areas like Mabalako, presents, once again, challenges around community acceptance and security. In addition, the response continues to be hampered by a lack of adequate funding and strained human resources.

The cluster of cases in Uganda is not unexpected; the rapid response and initial containment is a testament to the importance of preparedness in neighbouring countries. The Committee commends the communication and collaboration between DRC and Uganda.

At the same time, the exportation of cases into Uganda is a reminder that, as long as this outbreak continues in DRC, there is a risk of spread to neighbouring countries, although the risk of spread to countries outside the region remains low.

The Committee wishes to commend the heroic work of all responders, who continue to work under extremely challenging and stressful conditions. The Committee extensively debated the impact of a PHEIC declaration on the response, possible unintended consequences, and how these might be managed. Differing views were expressed, as the Committee acknowledged that recent cases in Uganda constitute international spread of disease.

It was the view of the Committee that the outbreak is a health emergency in DRC and the region but does not meet all the three criteria for a PHEIC under the IHR. While the outbreak is an extraordinary event, with risk of international spread, the ongoing response would not be enhanced by formal Temporary Recommendations under the IHR (2005).

Posted by Michael Coston at 1:51 PM