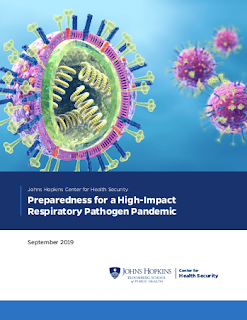 
A week ago we looked at a sobering WHO/World Bank GPMB Pandemic Report : `A World At Risk, which warned that  `. . . an outbreak equivalent to the 1918 influenza pandemic could kill an estimated 50 to 80 million people, spreading around the world in less than 36 hours and wiping out nearly five percent of the global economy.'


I followed up a couple of days later with a blog called #NatlPrep: Personal Pandemic Preparedness, focusing on individual and community preparedness.

Among the many sources of information the GPMB used in putting together their annual report were seven review papers produced by world experts and leading institutions that explored the challenges of pandemic preparedness.

More than 450 pages combined, these papers cover topics ranging from community involvement, to advancing R&D, to current Ebola outbreak in the DRC.


I've only had time to glance at all of them, but hope to peruse them all more carefully over time.

The one I've targeted first comes from the Johns Hopkins Center For Health Security - the same group that brought us the eye-opening Clade X exercise last year - and focuses on preparedness for a `high-impact respiratory pathogen'.

While pandemic influenza remains at the top of our threats list, the past 20 years has illustrated that there is more than just flu to be concerned about. The global spread of SARS in 2002-2003, the emergence of MERS-CoV in 2012, and a rogue's gallery (see below) of other viruses all have some pandemic potential.

There are other possibilities - including an as-yet unknown pathogen such as was featured in last year's Clade X exercise (see CLADE X: Archived Video & Recap) - all of which means we can't simply assume the next pandemic will be flu.

The JHCHS report covers a lot of territory in its 84 pages, but its general scope is summarized in the following excerpt from a John's Hopkins press release:

The Center analyzed numerous high-level reviews of global preparedness and conducted interviews with international experts in pandemic preparedness and response. The states of national and global readiness in 10 functional areas were examined, including global preparedness mechanisms; multisectoral involvement and coordination; surveillance, monitoring, and assessment; health systems and clinical management; community engagement; risk communication; research and development for medical countermeasures; nonpharmaceutical interventions; accidental release and biosafety; and deliberate use and biosecurity.

The findings detail the current capabilities and gaps that would likely hamper efforts to respond to a high-impact respiratory pathogen. The report identifies priority actions for countries, international organizations, and other stakeholders to pursue that would mitigate the public health, economic, social, and political consequences of the emergence of a high-impact respiratory pathogen.

The publication, Preparedness for a High-Impact Respiratory Pathogen Pandemic, can be found here.


Given the length and scope of this document, I highly recommend you take the time to read it in its entirety.  It will require a commitment of several hours, but I think you'll find it worth the effort.

A couple of snippets, however, to whet your appetite:

In estimating the impact of a 1918-like pandemic today, the authors write:


In 1918, the global case fatality ratio is estimated to have been 2.5%, but it was considerably greater in low- and middle-income countries, with some estimates exceeding 10%. Today, some high-income countries would be expected to fare much better because of modern health care, but the case fatality in countries with limited access to healthcare could be as bad as or worse than 1918.

Simple arithmetic would suggest the possibility of 100 to 400 million deaths if a 1918-like pandemic were to occur today, but unprepared or under-resourced health systems could further exacerbate disease transmission through nosocomial spread and an inability to promptly diagnose and render care, a particular concern for developing health systems.

During the 2003 SARS epidemic, 72% and 55% of presumed and confirmed cases in Toronto and Taiwan, respectively, occurred as a result of healthcare transmission. A similar nosocomial outbreak in which healthcare facilities became amplifiers of the epidemic, this time of MERS, happened in South Korea in 2015


As bad as that might be, a non-influenza pandemic  with a similar CFR would present even greater problems, as MCMs (medical countermeasures) such as vaccines, therapeutics, and diagnostics could take years to develop.


Despite two decades of research, we still have no vaccine against the Nipah virus, and our armamentarium against SARS and MERS is similarly deficit (see Manufacturing Pandemic Flu Vaccines: Easier Said Than Done).

As horrific as a pandemic influenza could be, we at least have antivirals and vaccine manufacturing expertise to help blunt its impact.


If the high-impact respiratory pathogen is not influenza, then the prospects around MCM development would be far more dire, as MCMs are likely to be much less far along in development—if in development at all. In the case that an existing vaccine candidate has been developed (eg, perhaps a coronavirus vaccine for an existing  coronavirus could be used with some value for a novel coronavirus that causes high-impact respiratory outbreak), there is likely to be no surge manufacturing plan or capacity.

If the pathogen is completely novel and there is no existing research base—what WHO refers to as a Disease X scenario—there is no alternative but to start with fundamental science and then advance MCMs through the development pipeline as quickly as possible.


Although it requires a monumental commitment to prepare in any significant way for a severe pandemic, another great scourge will come - likely with little or no warning -  and we'll have to fight it with whatever plans and resources we have at the time.

While it is impossible to be fully prepared for an unknown threat, the one excuse no government can legitimately claim is: They were never warned.
Posted by Michael Coston at 6:28 AM