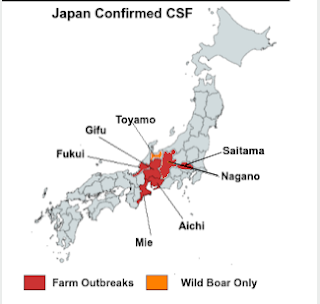 For a second day in a row (see yesterday's blog) a new Japanese Prefecture is reporting their first farm outbreak of Classical Swine Fever; today it's Nagano, which is the 6th Prefecture struck since the virus re-emerged a year ago after an absence of 26 years.


This is the 42nd farm outbreak reported, although more than 900 wild boar have been found to be positive across at least 7 Prefectures.  The last OIE update (#34) was a month ago, and so those numbers will be changing.


Confirmation of affected animals of swine fever in Nagano Prefecture, about (42 case was in Japan)

Interview in the field, thank you for your cooperation as strictly refrain from such that there is a risk that cause the spread of the disease.

(2) September 13 (Friday), where for the suspicion of swine fever is caused by the inspection at the Livestock Hygiene Service Center, sent the material to Noken mechanism Animal Health Research Institute (Note), was carried out a genetic analysis, today (September 14, Saturday), was found to be an affected animal of swine fever.

(Note) specialized research institutions on the only animal health in Japan

While CSF doesn't pose a human health hazard, it - very much like African Swine Fever (ASF) - can be devastating to the pork industry.
Posted by Michael Coston at 4:59 AM