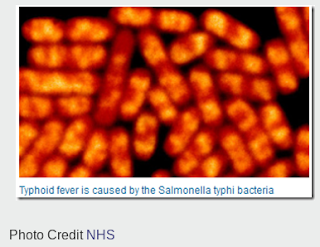 In March of 2018, in mBio: The Gathering Storm: Is Untreatable Typhoid Fever on the Way?, we looked at the first large outbreak of extensively drug-resistant (XDR) typhoid - which emerged in the Sindh region of Pakistan (includes Karachi & Hyderbad) in late  2016.


Salmonella Typhi, the causative agent of Typhoid Fever, is a bacterium that has no known natural reservoir outside of humans. It is usually acquired via the fecal-oral route, often by consuming food or drink that has been handled by someone who is shedding the Salmonella Typhi bacteria.

We revisited this story six months ago (see COCA CALL : Extensively Drug-resistant Salmonella Typhi Infections Emerge Among Travelers to or from Pakistan). At that time the CDC described the nearly three-year old outbreak as:


During 2016–2018, an extensively drug-resistant (XDR) Salmonella Typhi strain—only susceptible to azithromycin and carbapenems—emerged in Pakistan. More than 5,300 cases have been reported in the ongoing outbreak. During 2016–2018, typhoid fever was diagnosed in 29 patients in the United States with recent Pakistan travel; 5 had XDR Typhi.


One new case of typhoid fever admitted to Pakistan was the first case of widespread drug-resistant typhoid fever in the country. People should go to the high-risk countries with typhoid fever to be alert and take preventive measures.

Release date: 2019-09-24 The Department of Disease Control announced that there was a new case of typhoid fever in the country. It was a 30-year-old man in the middle of the country. During the incubation period, he traveled to Morocco, India, Indonesia and Pakistan. On August 4, he developed symptoms such as diarrhea, fever and rash. I did not seek medical treatment during my stay abroad. I went to the hospital after returning to China on August 26. As the symptoms persisted, I went to the hospital again on August 31 and took the test. The blood culture was detected and the typhoid bacillus was positively diagnosed. At first, the diarrhea was more serious and the symptoms were improved. At present, in the hospitalization isolation, the same family members are undoubtedly symptomatic.

According to the investigation by the health unit, the case did not eat raw food during the period of going abroad, and they all ate at the restaurant. After returning home, the three meals were cooked by the family. According to the results of genetic sequencing and drug resistance gene comparison, the infected place was found in Pakistan, and the case was detected in the case. The extensive drug resistance (XDR) typhoid strain was first detected in China. It is resistant to most of the antibiotics commonly used in the treatment of typhoid fever. It can only be treated with antibiotics (Azithromycin or Carbapenem).

According to the statistics of the epidemic situation of the Department of Disease Control, there were 18 cases of typhoid fever in this (2019) year ending September 23, of which 14 cases were overseas immigration cases. The infected countries were 6 cases in Indonesia and 2 cases in Cambodia, India, Philippines, Myanmar. 1 case in China, Malaysia and Pakistan; the other 4 cases were local cases.

The internationally widespread drug-resistant typhoid epidemic is concentrated in the Sindh epidemic in southeastern Pakistan. This year, as of September 8, there were nearly 5,200 cases, which is higher than the total for 2016-18.

The number of cases is in the capital of Karachi. (Karachi) accounted for more than 6%, followed by Hyderabad (20%); the capital has accumulated nearly 7,200 cases in 2017, and nearly 4 have become children aged 1-4. Another recent case of a confirmed case in Australia was a 20-month-old girl who traveled to Pakistan before the onset of illness.

Typhoid fever is a gastrointestinal infectious disease with an incubation period of about 8 to 14 days (ranging from 3 to 60 days). The infection route is raw food or food or water that is not cooked, contaminated by the patient or the faeces of the carrier. Common symptoms persist. Sexual fever, headache, abdominal pain, diarrhea or cough. The methods to prevent typhoid include: cooking the food well and using hot food, boiling water or using bottled mineral water. In addition, wash your hands with soap or hand washing before and after meals.

The Department of Diseases and Diseases said that at present, domestic tourism medical clinics provide self-funded typhoid vaccines to remind people who are planning to go to high-risk countries or regions with typhoid fever to be over 2 years old (especially to small cities and villages with relatively poor or poor sanitation, volunteering activities, Visiting relatives or personal travel, etc.), go to the consultation and evaluate the vaccination 2 to 4 weeks before going abroad. In the other day, you should pay attention to food safety and implement good personal hygiene practices such as proper hand washing and reduce the risk of infection. If you have suspected symptoms after returning to the country, you should seek medical advice as soon as possible and inform the doctor about the history of travel and diet. For more information, please visit the UNDCP Global Information Network (https://www.cdc.gov.tw) or call the Free Epidemic Prevention Line 1922 (or 0800-001922).


Based on this report, the spread of Typhoid in Pakistan continues to increase, with more cases in the past 9 months than were reported in the two previous years combined.

While still common in some developing countries, Typhoid fever is rarely seen anymore in the United States. The CDC’s Typhoid Fever FAQ states the U.S. sees only about 400 cases of Typhoid each year, of which 3/4ths are brought into this country via international travel.