I've been lucky enough to be a panelist twice on exercises held by the HHS/CDC, first in 2008 for H5N1 and again in 2009 for the H1N1 pandemic (see HHS Pandemic Exercise & To D.C. & Back) and they can be both intense and highly informative.

The moderator will have a basic story line (often with branches that anticipate certain decisions, and trajectories) -  but the panelists generally go in `cold' - and only learn of the developments as new SitReps arrive, and the scenario (invariably) worsens.


Panelists can expected to be put under pressure, and decisions they make early in the exercise may well come back to bite them later in the day. Those who watched last year's day-long pandemic table top exercise (see CLADE X: Archived Video & Recap) already know to expect the unexpected.

If you haven't had the time to watch the (highly recommended) entire 8 hour exercise, I would urge you to at least view the 5 minute wrap up video. It will give you some idea of the possible impact of a severe - but not necessarily`worst case' - pandemic.

Running 3.5 hours, tomorrow's exercise should move along at a brisker pace than 2018's day-long Clade X tabletop.  Details of the event follow.  I'll return with some additional resources after the break.

The Johns Hopkins Center for Health Security, in collaboration with the World Economic Forum and the Bill & Melinda Gates Foundation, is hosting Event 201, a 3.5-hour multimedia pandemic simulation involving 16 leaders of global businesses, governments and public health on Friday, Oct. 18, 8:45 a.m.-12:30 p.m., in New York City. Live observation of Event 201 is by invitation and media is welcome. The Center for Health Security is part of the Johns Hopkins Bloomberg School of Public Health.

The pandemic exercise will also be livestreamed to the public 8:50 a.m.- 12:30 p.m. with a break at about 10:15. Participants pre-register and view at http://www.centerforhealthsecurity.org/event201/). Live coverage of the scenario (including video updates and live briefings) will be shown, but discussions at the table among leaders playing roles will be seen only by the in-person audience. Online viewers will participate in their own moderated discussions during those times.

The world has seen a growing number of epidemic events in recent years—approximately 200 annually. A large global pandemic (such as an Event 201) would be disruptive to health, economies, and society. Recent economic studies show that pandemics could be the cause of an average annual economic loss of 0.7% of global GDP—or $570 billion.

While the public sector is the front line of defence against pandemics, most of the resources and capabilities exist in the private sector. Like the Center’s previous preparedness exercises—Clade X, Dark Winter, and Atlantic Storm—Event 201 participants will work through the complex policy, ethical, financial and political challenges they would face were a serious health crisis to reach pandemic levels. This will be a unique pandemic exercise to engage industry leaders with governments and the pandemic response community.

WHAT: Event 201 is a multimedia pandemic exercise played by leaders of governments, policy, public health, and global businesses from industries essential to pandemic response and keeping economies and society moving during a severe, highly transmissible intercontinental outbreak. The simulation will underscore the need for the inclusion of private industry, along with business-government collaboration, in planning ahead to mitigate the devastating worldwide economic and societal impact of pandemics. A simultaneous live online virtual version of the exercise is open to the public. Participants in the virtual exercise will see the same simulated newscasts, briefings, and questions as the live participants in New York but will engage in a separate online discussion of the topics raised.

The following may be available for interviews upon request:
The exercise is supported by funding from the Open Philanthropy Project.

MEDIA INFORMATION:
Please remind audiences THIS IS A FICTIONAL EXERCISE AND DISEASE


Last month we looked at a sobering WHO/World Bank GPMB Pandemic Report : `A World At Risk, which warned that  `. . . an outbreak equivalent to the 1918 influenza pandemic could kill an estimated 50 to 80 million people, spreading around the world in less than 36 hours and wiping out nearly five percent of the global economy.'


I followed up a couple of days later with a blog called #NatlPrep: Personal Pandemic Preparedness, focusing on individual and community preparedness.

A week later, in Center for Health Security Report On Preparedness for A High-impact Respiratory Pathogen we looked at one of the foundational studies for the GPMB pandemic report - prepared by the JHCHS - which vividly outlined many of the challenges the world would face during a severe pandemic. 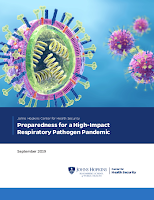 The 84-page report covers a lot of territory, but is well worth reading in its entirety.  A brief snippet deals with estimating the impact of a 1918-like pandemic today, where the authors write:


In 1918, the global case fatality ratio is estimated to have been 2.5%, but it was considerably greater in low- and middle-income countries, with some estimates exceeding 10%. Today, some high-income countries would be expected to fare much better because of modern health care, but the case fatality in countries with limited access to healthcare could be as bad as or worse than 1918.
Simple arithmetic would suggest the possibility of 100 to 400 million deaths if a 1918-like pandemic were to occur today, but unprepared or under-resourced health systems could further exacerbate disease transmission through nosocomial spread and an inability to promptly diagnose and render care, a particular concern for developing health systems.

Although influenza is the most likely pandemic scenario, it far from the only possibility, and a non-influenza pathogen could prove even tougher to deal with.

Regardless of the scenario, tomorrow's tabletop is less about predicting the course of the next severe pandemic, and more about illuminating the hard choices that world leaders and emergency managers will have to make during the next global health crisis.

It should make for a fascinating event.
Posted by Michael Coston at 4:48 AM