mBio: Oseltamivir Is Effective against 1918 Influenza Virus Infection of Macaques but Vulnerable to Escape 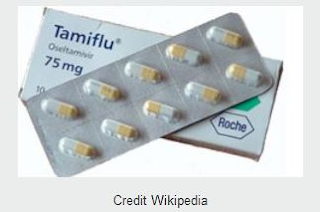 Although it might be the only lifesaving antiviral option available to many people during an influenza pandemic - Oseltamivir (aka `Tamiflu (r)') - is the drug that millions of people apparently love to hate.


The two key words being `seasonal' and `healthy'.

Among those with severe (seasonal or novel) flu infection, or those with co-morbidities, the evidence strongly suggests that this drug reduces hospital stays and saves lives. A few past blogs include:

ECDC: Expert Opinion On Use Of Neuraminidase Inhibitor Antivirals For Influenza


Were it not for a twist of fate, Oseltamivir might not even be available today.  In 2008, after less than a decade of use, a highly resistant H1N1 virus emerged sporting the H275Y mutation and spread globally, which pretty much negated its effectiveness (see CIDRAP article With H1N1 resistance, CDC changes advice on flu drugs).


While still effective against H3N2, by the spring of 2009 Oseltamivir's future was increasingly in doubt. That is, until late April, when a novel, susceptible H1N1 (soon to be pandemic) virus emerged from pigs, and quickly supplanted the resistant strain.

While we've seen some scattered pockets of oseltamivir resistance since then, the antiviral remains effective in > 98% of cases.  Most of these resistant cases involved patients who developed spontaneous' resistant viruses while receiving the antiviral drug, a rare, but known complication.

Even with the additional of a new class of antivirals last year (see FDA Approval Of Xofluza : A New Class Of Influenza Antiviral), oseltamivir remains an important part of our influenza armamentarium.


All of which brings us to a new research article, published today in mBio, which examines the effectiveness (in macaques) of oseltamivir against the fully reconstructed 1918 H1N1 strain of influenza, and finds it to be an effective prophylaxis and valuable treatment, but is also prone to developing spontaneous resistant strains.

A few excerpts (but follow the link to read the full report), after which I'll return with a bit more.

The 1918 influenza virus, subtype H1N1, was the causative agent of the most devastating pandemic in the history of infectious diseases. In vitro studies have confirmed that extreme virulence is an inherent property of this virus.

Here, we utilized the macaque model for evaluating the efficacy of oseltamivir phosphate against the fully reconstructed 1918 influenza virus in a highly susceptible and relevant disease model. Our findings demonstrate that oseltamivir phosphate is effective in preventing severe disease in macaques but vulnerable to virus escape through emergence of resistant mutants, especially if given in a treatment regimen.

Nevertheless, we conclude that oseltamivir would be highly beneficial to reduce the morbidity and mortality rates caused by a highly pathogenic influenza virus although it would be predicted that resistance would likely emerge with sustained use of the drug.

Oseltamivir phosphate is used as a first line of defense in the event of an influenza pandemic prior to vaccine administration. Treatment failure through selection and replication of drug-resistant viruses is a known complication in the field and was also demonstrated in our study with spread of resistant 1918 influenza virus in multiple respiratory tissues.

Here, we demonstrate that oseltamivir phosphate, which has never been evaluated in macaques against infection with the fully reconstructed 1918 influenza virus (5,6), is effective in preventing severe disease in cynomolgus macaques if given prophylactically.

Efficacy was reduced in a treatment regimen through emergence of oseltamivir-resistant mutants that led to the death of one of four animals.

Our demonstration of the presence of oseltamivir-resistant virus in upper respiratory tract secretions suggests that spread of drug-resistant virus, even from successfully treated individuals, is likely to be a problem where sustained transmission of virus occurs. This emphasizes the importance of implementing combination therapy and vaccination strategies early in an epidemic or pandemic.

Here, we show that oseltamivir treatment of macaques infected with the 1918 virus was successful in reducing disease and increasing survival when initiated prior to infection and partially successful when administered 24 h postinfection.

However, the latter scenario represents an expected treatment regimen following known exposure to a virus, such as accidental infection with the 1918 virus, and selection and replication of drug-resistant virus complicated treatment and reduced the effectiveness of treatment.

Treatment failure in one of four treated animals, associated with development and spread of resistant virus in multiple respiratory tissues, emphasizes the importance of early treatment and the possibility that noncompliance may exacerbate treatment ineffectiveness.

Our demonstration of oseltamivir-resistant virus in upper respiratory tract secretions suggests that spread of drug-resistant virus, even from successfully treated individuals, is likely to be a problem where sustained transmission of virus occurs, such as in a pandemic.

Two classes of drugs against influenza virus infections have been approved over the decades, namely, the M2 ion channel inhibitors and neuraminidase inhibitors such as amantadine and oseltamivir, respectively (24, 25). Recently, a member of a new class of drugs has been promoted for influenza treatment, the polymerase inhibitor baloxavir (26), which is now approved in the United States.

Oseltamivir alone is active against the 1918 virus and would be highly beneficial to reduce morbidity and mortality during a pandemic, even with a highly pathogenic virus such as the 1918 influenza virus as the causal agent. However, combination treatment with oseltamivir and baloxavir might be more beneficial given the fact that for each drug, viruses with reduced sensitivity have been reported.

Antivirals, like antibiotics, are double-edged swords. The more we use them, the greater the chances are that we could lose them.  That didn't happen during the 2009 pandemic, of course . . .  but then, every pandemic virus is different.


Today's study reinforces the idea that early receipt of neuraminidase inhibitors (NAIs) antivirals can substantially reduce morbidity and mortality from severe influenza, but it also reminds us that it probably isn't going to work equally well for everyone.

The biggest challenge - particularly during a pandemic - will be getting these potentially lifesaving drugs to the patients that need them within the first 24-48 hours, and making sure that they take the full dose.

But that is a topic for another blog.
Posted by Michael Coston at 8:38 AM