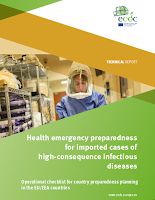 One of the realities of life in this second decade of the 21st century is that the world is vastly smaller than was just a few decades ago.  Today you can literally hop on a plane and be in any corner of the world within 24 hours.


Millions of airline passengers make international flights each day, and along with their luggage and cell phones, a small percentage will be carrying infectious diseases.

Most viral infections have a 2 to 7 day incubation period, giving an infected traveler a fairly long asymptomatic `window' for travel. As a result, over the past decade we've seen a number of exotic, often highly dangerous diseases being carried to new regions by travelers around the globe.

A few recent examples include:
While these are the high profile, `scary'  diseases, over the past two decades we've West Nile Virus, Zika and Chikungunya introduced to the Americas, which have become endemic in some regions, and combined have resulted in tens of millions of infections and thousands of deaths.

For those who wonder why the recent emphasis on pandemics and emerging infectious diseases (see WHO/World Bank GPMB Pandemic Report : `A World At Risk'), in large part it's because modern technology has made the rapid spread epidemics and pandemics easier, and far more likely than ever before.

While the arrival of a viremic traveler carrying Ebola, Lassa Fever, MERS-CoV, or the Nipah virus doesn't guarantee an outbreak, the experience of South Korea in 2015 shows what can happen when a healthcare system is unprepared to deal with the unexpected arrival of a single carrier of a highly infectious disease.

An Epidemiological report, issued in October of 2015 summed up the human carnage:


A total of 186 confirmed patients with MERS-CoV infection across 16 hospitals were identified in the Republic of Korea. Some 44.1% of the cases were patients exposed in hospitals, 32.8% were caregivers, and 13.4% were healthcare personnel.

Getting hospitals around the world better prepared to deal with walk-in patients that could be carrying one of these high consequence infectious diseases becomes a bigger priority with every passing year.


To that end, today the ECDC published a 21-page PDF operational checklist for EU hospitals to follow when dealing with suspected imported cases of exotic, infectious diseases.

First the executive summary, followed by a link to the technical report, after which I'll return with a postscript:

Preparedness planning is essential in order to respond effectively to outbreaks, including single cases of high consequence infectious diseases (HCID), such as the importation of a viral haemorrhagic fever case.

Several HCIDs are transmissible from person to person and therefore require healthcare workers to take precautions to prevent transmission.

The ECDC preparedness checklist describes the system elements that need to be planned, and the required organisational competencies in order to effectively manage the threat. It has been developed for public health planners.

The content of the ECDC checklist is based on work performed during the Ebola virus disease outbreak in West Africa (2013–2016) and a specific protocol used in the peer-review visits to three EU member states. Enhanced with a number of references, it may be seen as complementary to broader preparedness checklists published by other international organisations.


While we speculate about the nature and timing of the next global pandemic, the threat from viremic travelers is already here.  Most will be carrying something far less dire than Ebola, Lassa, or CCHF - but events of the past decade have shown that the risks are quite real.

Some past blogs on how U.S. hospitals and public health are preparing to receive, and treat, these kinds of patients include:

Posted by Michael Coston at 6:24 AM