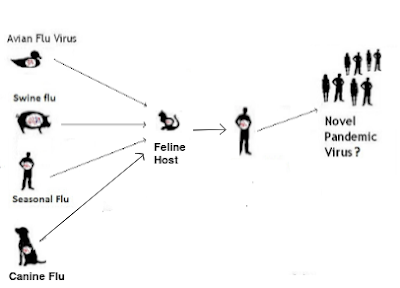 Until early in the last decade, cats and dogs were generally thought to be immune to influenza viruses. That perception changed in 2003 when avian HPAI H5N1 began to spill over into cats in Southeast Asia.

The following comes from a World Health Organization GAR report from 2006.


Three years after that (2007), a second canine flu virus emerged - this time evolved from an avian H3N2 virus - and began to spread in Asia. (see Transmission of Avian Influenza Virus (H3N2) to Dogs).


In 2015, Canine H3N2 arrived in North America (see CDC’s Key Facts On The New H3N2 Canine Flu), and has now spread across most of the United States.

While avian-origin canine H3N2 has not been shown to infect humans, numerous reports have come out of China and Korea suggesting it may be adapting to other hosts, and that it continues to reassort with other avian and human flu viruses. Including:

Perhaps most significantly, canine H3N2 was observed jumping from dogs to cats both in the field, and in the lab (see Interspecies Transmission Of Canine H3N2 In The Laboratory), leading researchers to write:

Conclusion Cats appear to be another susceptible host of CIV H3N2, whereas ferrets are not likely natural hosts. The molecular-based mechanism of interspecies and intraspecies transmission of CIV H3N2 should be further studied.

Over the past five years, we've learned a good deal more about the susceptibility of dogs and cats to a variety of avian, swine, equine, and human flu strains. A few recent on-topic blogs include:

The last example above demonstrates just how quickly a novel (in this case, avian H7N2) virus can spread among a population of cats in an animal shelter, as more than 400 cats were affected.

Additionally, at least two people were infected, and 5 others showed low titers, suggestive of infection.

All provide evidence that cats (and dogs) can serve as intermediate hosts, and transmit novel flu viruses on to other species, including humans.


The difference between dogs and cats is that so far, we've not seen any feline specific flu subtype become fixed in cats, while two canine specific subtypes (H3N2 and H3N8) continue to circulate in dogs.

Today, we've a new study published in the journal PLoS, that finds that H3N2 canine flu viruses - when serially passaged in feline (CRFK) cells - acquired mutations that might allow the virus to become better adapted to cats.

The full open-access study is available at the link below, and I've only posted the highlights.  When you return, I'll have a postscript.

H3N2 canine influenza viruses are prevalent in Asian and North American countries. During circulation of the viruses in dogs, these viruses are occasionally transmitted to cats. If this canine virus causes an epidemic in cats too, sporadic infections may occur in humans because of the close contact between these companion animals and humans, possibly triggering an emergence of mutant viruses with a pandemic potential.

In this study, we aimed to gain an insight into the mutations responsible for inter-species transmission of H3N2 virus from dogs to cats. We found that feline CRFK cell-adapted viruses acquired several mutations in multiple genome segments.

These findings suggest that the mutations, especially the two HA mutations, identified in this study, might be responsible for adaptation of H3N2 canine influenza viruses in cats.


In conclusion, we identified multiple mutations required for adaptation of H3N2 CIV to feline cells. Although a study with experimental infection of feline cell-adapted viruses in cats is required, the mutations found in these viruses may contribute to understand the mechanism on cross-species transmission of CIVs and risk assessment for pandemic preparedness.


Although currently regarded as a relatively low-risk virus - two years ago the CDC added Canine H3N2 to their IRAT (Influenza Risk Assessment Tool) listing of novel flu subtypes/strains that circulate in non-human hosts and are believed to possess some degree of pandemic potential.

As companion animals, both dogs and cats have unique access to humans, and so we watch the evolution of influenza viruses they can carry closely. For more on on the carriage of novel flu viruses by pets and companion animals, you may wish to revisit:

Report: Skunks and Rabbits Can Catch And Shed Avian Flu

Posted by Michael Coston at 8:09 AM