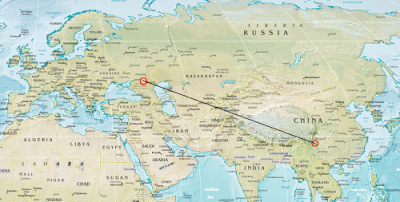 
The newer, European version was the result of a reassortment of HPAI H5N8 with local, European LPAI viruses during Europe's devastating avian epizootic three years ago. Much like its parental HPAI H5N8, it has shown no ability to infect humans.

The slightly older Asian H5N6, on the other hand, has infected - and killed - humans (see map below), albeit only in Mainland China. While this Asia H5N6 has been reported in Vietnam, Laos, and Cambodia in poultry, it has not spread via migratory birds as far and wide as has HPAI H5N8 or the much older HPAI H5N1. 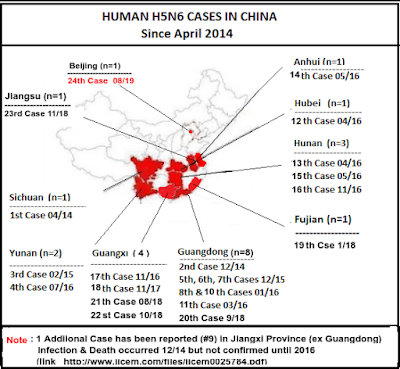 Today, however, we've a Research letter published this past week in the EID Journal which describes and characterizes an `Asian'  H5N6 virus recovered from a bird in Southwestern Russia, some 5000 km north and west of Sichuan China.

This report doesn't come as a complete surprise, as last February the the World Health Organization announced their intention to create a new H5N6 Candidate Vaccine (A/Guangdong/18SF020/2018-like A(H5N6)), noting that:


Viruses from humans, an increasing number of poultry and environmental samples from China, some poultry in Viet Nam and a wild bird (common gull) in the Russian Federation belonged to an HA subgroup not currently represented by an existing CVV (Fig. 1).

What wasn't apparent from that report was how far from home - and how close to Eastern Europe and the Middle East - this migratory gull was. This virus was recovered in the Saratov region, which lies beneath several migratory flyways that funnel birds to and from Europe, the Middle East, and Africa.

First some excerpts from this report, then I'll return with a postscript:


In October 2018, we collected cloacal swab samples from aquatic birds around the Volga River Basin in the Saratov region of Russia (51°26′11.7″N, 46°06′49.9″E). We isolated avian H5 influenza virus from 1 sample from a common gull (Larus canus) by using embryonic chicken eggs. We used whole-genome sequencing to extract the virus DNA and conducted a phylogenetic analysis against strains available in the GISAID EpiFlu database (http://www.gisaid.orgExternal Link). We submitted genetic data on the virus, A/common gull/Saratov/1676/2018, to the GISAID EpiFlu database (identification no. EPIISL336925).

Analysis of homology of A/common gull/Saratov/1676/2018 with H5N6 strains available from GISAID showed that all 8 gene segments clustered with human H5N6 strains isolated in southeast China in 2018. We noted 99% homology with human strain A/Guangxi/32797/2018 for all genes, a genetic similarity that raises the question of which pathway led to the spread of the virus.

We believe A/common gull/Saratov/1676/2018 was transferred to eastern Russia through northeast Siberia, where HPAI H5N8 clade 2.3.4.4.A was detected in 2018 (10), the same pathway through which H5N8 virus was transferred from Southeast Asia to Europe. These viral pathogens could be spread by migratory birds over long distances along flyways from southern China to southwestern Russia during a migration season. Our study indicates that emerging H5N6 viruses are a potential threat to public health.

Dr. Susloparov is a senior researcher at the Zoonosis Infections and Influenza Department, State Research Center of Virology and Biotechnology Vector, Koltsovo, Russia. His research interests include the molecular genetics, epidemiology, and host-pathogen interaction of avian influenza viruses.


While one HPAI infected gull, far from home, does not a zoonotic crisis make, the migratory pathway this virus appears to have taken is eerily similar to the itinerary that HPAI H5N1 followed in 2004-2005 - and the path that HPAI H5N8 took three winters ago - in spreading to Europe, Africa, and the Middle East.


While more dangerous to humans than its globetrotting H5N8 cousin, the saving grace with Asia's HPAI H5N6 has been is limited range, a relatively small number of outbreaks and human cases, and the highly effective Chinese poultry vaccination program which has kept both H5 and H7 viruses subdued for the past couple of years.

HPAI H5N6 is constantly changing, and reinventing itself.  It is possible the virus has become - like HPAI H5N8 - more easily carried by migratory birds.  If that has (or is about to) happen, then H5N6's threat profile will likely increase.

A reminder that while avian influenza has been on the back burner the past couple of years, Nature's laboratory is open 24/7, and the status quo never lasts for very long.

Posted by Michael Coston at 7:25 AM