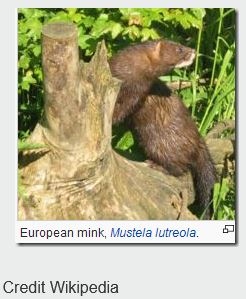 Conventional wisdom holds that the next pandemic influenza virus will most likely evolve in, and emerge from, either birds or pigs. Both species are hosts for a wide variety of novel flu subtypes, and both have contributed to the emergence of flu pandemics in the past.


Much further down the list we have an array of flu-susceptible mammals, including dogs, cats, horses, seals, and peridomestic animals like skunks, raccoons, and rabbits.

Dogs, cats, and to a lesser extent - horses - are of greatest concern because they generally have closer contact with humans, while seals, skunks, and rabbits usually do not.  We've looked at their potential role in a future pandemic a number of times, including:

But over the years we've seen another small mammal, one that is susceptible to a remarkable variety of flu viruses, and - largely because they are farmed worldwide -  that could also serve as a plausible `mixing vessel' for influenza; mink.

Mink farming has become big business in China over the past decade, with more than 60 million raised in 2012. Increasingly fox and raccoon dogs are raised on the same farms, increasing the odds of inter-species transmission of novel viruses.


In China, farmed animals are often fed a diet that includes raw poultry or poultry products (cite), which increases their risk of exposure to avian viruses, while wild mink may consume waterfowl, fish, frogs, and other small mammals.

A decade ago, in 2009's That Touch Of Mink Flu, we looked at a story out of Denmark, where at least 11 mink farms in the Holstebro were reported to be infected with a variant of the human H3N2 virus.
In 2015, we revisited mink flu in That Touch Of Mink Flu (H9N2 Edition), after a study was published in the Virology Journal on a serological survey of antibodies to H9N2 (along with H5 & H7 viruses) in Chinese farmed minks, along with the results of experimental infection of minks with the H9N2 virus.


We've returned to H9N2 in minks at least twice since then (see H9N2 Adaptation In Minks) and That Touch Of Mink Flu (H9N2) - Revisited.

We're mink simply conveyors the same flu virus that they acquired from humans or pigs, then their infection would be of little consequence. But since flu viruses tend to adapt to each new host, a species jump can introduce new, and unpredictable, evolutionary changes to the virus.


Although we only have the abstract available (the rest is behind a pay wall), we have fresh report - not surprisingly out of China - of a reassorted Eurasian Avian-like Swine Influenza H1N1 virus found in farmed mink.

First the link, and abstract, then I'll return with some background on the EA H1N1 virus.


• We isolated and identified a swine origin triple-reassortant H1N1 influenza virus from the lungs of infected mink.

• This stain was lethal in mice and had low pathogenicity to mink.

We evaluated the phenotype and genotype of a fatal influenza/canine distemper virus coinfection found in farmed mink in China. We identified a novel subtype H1N1 influenza virus strain from the lungs of infected mink designated A/Mink/Shandong/1121/2017 (H1N1).

The EID50/0.2 mL of this strain was 10-6.2 and pathogenicity tests were 100% lethal in a mouse model of infection. We found that while not lethal and lacking any overt signs of infection in mink, the virus could proliferate in the upper respiratory tracts and the animals were converted to seropositive for the HA protein.


Since the influenza subtypes that commonly circulate in swine (H1, H2 & H3) are also the same HA subtypes that have caused all of the human pandemics going back at least 130 years (see Are Influenza Pandemic Viruses Members Of An Exclusive Club?), we pay particular attention to their evolution and spread in the wild.


Her comments came after the publication of her 2015 paper Prevalence, genetics, and transmissibility in ferrets of Eurasian avian-like H1N1 swine influenza viruses.

In June of 2016, in Sci Rpts: Transmission & Pathogenicity Of Novel Swine Flu Reassortant Viruses we looked at a study where pigs were experimentally infected with one of these Eurasian-Avian H1N1 swine influenza viruses and the 2009 H1N1pdm virus.

A few months later, in EID Journal: Reassortant EAH1N1 Virus Infection In A Child - Hunan China, 2016, we reviewed the case report on a 30-month old child from Hunan Province, who was infected with one of these reassortant EAH1N1 - H1N1pdm viruses.


The emergence of novel swine viruses is truly a global concern, yet  influenza surveillance in swine is minimal, and in many places it is nonexistent.

Even less studied is the evolution and spread of novel flu viruses in other farmed  species, like mink. The EA H1N1 virus in today's report was discovered more by happenstance, than design.

While mink may seem a long-shot, 3 months ago in Nature: Semiaquatic Mammals As Intermediate Hosts For Avian Influenza, we saw a study that suggested that mink be considered an important sentinel species for influenza surveillance.

It suggested that the semiaquatic mammals (riverside mammals), rather than pigs, might be the intermediate host to spread AIVs and serve as a potential mixing vessel for the interspecies transmission among birds, mammals and human.

In epidemic areas, minks, possibly some other semiaquatic mammals as well, could be an important sentinel species for influenza surveillance and early warning.


Of course, we'll never know how much of a role mink play in novel flu's ecology and evolution until we start seriously looking.
Posted by Michael Coston at 7:34 AM