Report: China To Release 40,000 Tons Of Frozen Pork Reserves Due To ASF Shortage 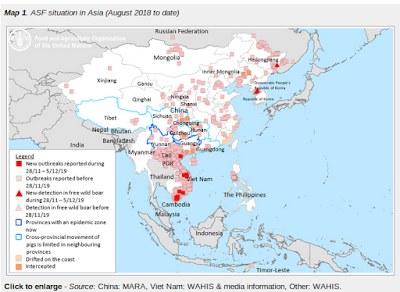 While there are longstanding international agreements governing the timely disclosure of disease outbreaks (both human and agricultural) around the globe, one needn't look too hard to see instances where politics and/or economic considerations take precedence over transparency.


China famously hid their SARS outbreak for months over the winter of 2002-2003, Indonesia temporarily stopped reporting on avian flu late in the last decade, early on Saudi Arabia drug their heels on MERS, Egypt did their best to downplay and under-report their 2015 H5N1 outbreak, and North Korea - despite leaked reports - rarely discloses any outbreaks at all.

There are others of course.  Some we know, others we only suspect, and likely still others that have been successfully hidden from our view.   We never know what we don't know.

Over the past 15 months we've watched as African Swine Fever (ASF) has swept across China and much of Southeast Asia. While still unconfirmed, last week we saw Indonesia's Veterinary Medical Assoc. (PDHI) Urge Govt. To Declare ASF Epidemic.

China, which began reporting outbreaks in August of 2018, stopped - or at least greatly slowed - their reporting after a few months despite growing evidence of tens of millions of pigs lost to the disease.

Officially, their latest report to the FAO (Dec 5th, 2019) shows less than 1.2 million pigs culled, a number which has barely budged since early last summer.

Since the Ministry of Agriculture and Rural Affairs (MARA) confirmed its first ASF outbreak in Liaoning Province on 3 August 2018, 163 outbreaks detected in 32 Provinces / Autonomous Regions / Municipalities / Special Administrative Region, about 1,193,000 pigs have been culled  [reference].

Last April, in African Swine Fever In China: Epizootic or An EpicZootic?, I wrote about this RaboResearch report, which estimated that between 150-200 million Chinese pigs have already been infected with ASF - more than all the pigs in Europe - and that China's pig production will drop 30% in 2019.

Today, Reuters is reporting that China will release 40,000 tons of frozen pork reserves on Dec. 12th, due to the extreme shortage of pork ahead of this year's Lunar New Year.


China previously released 3 small batches (10,000 tons each) of pork in September, but this new, larger release isn't expected to make much of a dent in the shortage, which has been estimated at over 13 million tons for the year.


A couple of weeks ago, in African Swine Fever's (ASF) Other Impacts; Pharmaceuticals, Bushmeat, and Food Insecurity, we looked at some of the potential ramifications arising from this Chinese aporkalypse.

While ASF doesn't impact human health directly, the economic impacts, resultant food insecurity, and potential political instability from these sorts of massive losses can be far reaching, and unpredictable.

As commercial pork becomes either too expensive or too scarce, other food sources - particularly poultry - will gain market share.  And that could lead to more avian flu outbreaks or a greater dependence on wild game or bushmeat, which in turn could allow for spillover of other zoonotic diseases.

Events that are all the more concerning when you consider the current level of transparency we are seeing from China.