The recent uptick in MERS cases which began in October (n=14) and continued in November (n=12) appears to have slowed over the past couple of weeks, but we are still well above 2018's total.


The numbers we get only reflect laboratory confirmed cases, and it is likely that a substantial number of mild and/or asymptomatic cases evade detection (see  EID Journal: Estimation of Severe MERS Cases in the Middle East, 2012–2016).

Once a month the WHO's EMRO (Eastern Mediterranean Regional Office) provides a summary of MERS activity in the Middle East - and around the world - based on what is officially reported by individual Ministries of Health to the World Health Organization.

In their latest report, WHO EMRO reports 11 new MERS Cases - all from Saudi Arabia - during the month of November  Among these, 1 Healthcare worker was infected. 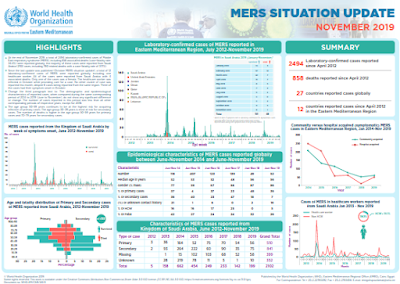 Posted by Michael Coston at 5:55 AM