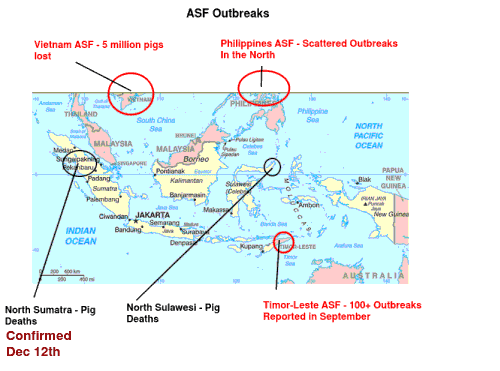 
For well over two months we've been following reports of unusual pig mortality (`Babi Mati') in North Sumatra carried by the Indonesian press (see Indonesia: Media Reports Of Unexplained Pig Deaths In Multiple Regions) - and while the very strong suspicion has been that African Swine Fever is the culprit - officially the government has not confirmed the cause.


For months the government has called this outbreak  `pig cholera' - which usually refers to Classical Swine Fever (CSF) - while insisting that additional tests were pending'.


Ten days ago we saw a comment from the FAO indicating they were ' . . . . liaising with the Directorate General of Livestock and Animal Health Services, Indonesia to confirm the cause and explore needs.', followed two days later by the Indonesian Veterinary Medical Assoc. (PDHI) Urging The Govt. To Declare An ASF Epidemic.


Whatever the reasons behind their two month delay in doing so - with increasing calls from local politicians, desperate farmers, and professional groups - yesterday the Indonesia MOA finally confirmed that African Swine Fever is behind their recent pig epidemic.

This from the FAO ASF (Dec 12th) Update.

The Minister of Agriculture announced the confirmation of ASF outbreak in North Sumatra Province on 12 December 2019. Since late September, increased pig mortality have been reported in North Sumatra and some other provinces. FAO is liaising with the Directorate General of Livestock and Animal Health Services.

The Director of Animal Health requested FAO to provide recommendations on containment and control of African Swine Fever (ASF) in the event that the disease is confirmed as present in the country. The FAO team is drafting recommendations on ASF control, appropriate to conditions in Indonesia.


The ASF situation in several other Asian countries - including China and North Korea - remain murky as well.

On Tuesday of this week, in Report: China To Release 40,000 Tons Of Frozen Pork Reserves Due To ASF Shortage, we saw China's latest attempt to soften the impact of what is undoubtedly a massively under-reported agricultural crisis in their pork industry.

While maintaining that fewer than 1.2 million pigs have been lost to ASF (a number that has barely budged since the summer), most outside experts put China's losses at more than 200 times higher (see Rabobank Research Analysis (“African Swine Fever: A Global Update.”)


Similarly, North Korea announced a single outbreak in May of 2019, but has remained silent since, despite persistent rumors of ASF's spread.

Indonesia becomes the 11th Asian nation to confirm African Swine Fever since it first appeared in China in August of 2018. Despite intensive efforts on the part of countries like Vietnam, China, and South Korean, ASF continues to spread relentlessly while exacting a massive economic and societal toll.

Although ASF doesn't impact human health directly, the economic impacts, resultant food insecurity, and potential political instability from these sorts of massive losses can be far reaching, and unpredictable.
Posted by Michael Coston at 5:13 AM