The overnight updates from China on the number of new COVID-19 cases continues to show a day-to-day decline, and while that is ostensibly good news, there is considerable debate over China's capacity to test cases, the accuracy of the test results, and concerns over recent changes reportedly made to their diagnostic criteria.


Researchers at the MRC Centre for Global Infectious Disease Analysis at Imperial College London - a WHO Collaborating Center - estimate that only 1 in 19 infected people in Wuhan are being tested for the virus. 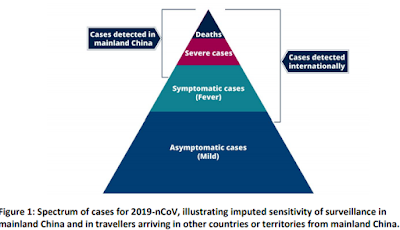 And since only deaths of those who have tested positive for the virus are reported, the 1,116 deaths cited by China is also highly suspect.  The daily numbers, while a useful metric, almost certainly badly underestimate the extent of the outbreak in China.

And that could be good news, at least as far as the overall CFR of this disease is concerned.  Even if the number of deaths is off by a factor of 10, with the number of estimated cases nearly 20 times higher than stated, that would cut the apparent mortality rate in half.


The rub is, there are over 7,000 seriously ill people hospitalized in China, and their outcomes are still unknown.  Some percentage of these cases will not survive, making an assessment of the severity of this disease very difficult to determine.

Taking their best shot at it, with the limited data available, the MRC Centre for Global Infectious Disease Analysis has issued their 4th Report, which estimates that 1 in 5 of the severe cases will likely die, and that COVID-19 likely has a CFR of about 1%.

Some excerpts from yesterday's press release/news story by Imperial College of London.

Imperial researchers have released estimates on the fatality rate of the Covid-19 coronavirus.

According to the latest estimates from the team, from the MRC Centre for Global Infectious Disease Analysis at Imperial, one percent of people with the disease will die from their infection.

Our estimates suggest the impact of the unfolding epidemic may be comparable to the major influenza pandemics of the twentieth century.

This is the fourth report from the team, who are also part of J-IDEA, the Abdul Latif Jameel Institute for Disease and Emergency Analytics.

Since the emergence of the new coronavirus (Covid-19) in December 2019, the team have adopted a policy of immediately sharing research findings on the developing pandemic. The new report presents an assessment of the severity of the likely health impact of Covid-19.

A key measure of severity of any outbreak is the case fatality ratio (CFR) - the proportion of people with a disease who will eventually die as a result of infection. Quantifying this can be challenging.

Cases of infection are detected through surveillance, which typically occurs when ill people seek healthcare. Depending on the demands a healthcare system is under, and the capacity to undertake testing, confirmed case numbers reported during an outbreak only ever represent a fraction of the true levels of infection in the community.

In addition, it can take weeks for the final clinical outcome of someone infected with a respiratory virus such as Covid-19 to be known and reported.

For the new report, the researchers used statistical models that combined data on deaths and recoveries reported in China and in travellers outside mainland China, as well as infections in repatriated citizens.

Dr Ilaria Dorigatti, co-author of the report, said: “The estimates published in today’s report rely on limited data and the next few weeks will provide valuable information on the outcome of current infections, which will allow us to refine our estimates and fill our knowledge gaps on the severity of this new virus.”

Professor Neil Ferguson, co-author of the report, explained: “Understanding the likely impact of the unfolding pandemic caused by the Covid-19 virus on human health will be critical to informing the decisions made by countries in the coming weeks in how best to respond to this new public health threat. Our estimates – while subject to much uncertainty due to the limited data currently available – suggest that the impact of the unfolding epidemic may be comparable to the major influenza pandemics of the twentieth century. It is therefore vital that countries across the world continue to work together to accelerate the development and testing of effective treatments and vaccines, on the fastest possible timescale. Surveillance and data sharing also need to be further enhanced to allow the spectrum of disease severity caused by this virus to be better understood.”

One in five fatality rate among severe cases

The team estimate that people dying now from the virus on average first developed symptoms three weeks ago. This means the numbers of deaths reported today should be compared with the numbers of cases reported over two weeks ago, to gain insight into the true proportion of people who might die from their infection.

Assuming these estimates pan out (and that's still a big assumption), a 1% Case Fatality Rate - while half of what was seen during the 1918 pandemic - is still easily 10 to 20 times deadlier than seasonal flu.


Even at half that rate (.5%), COVID-19 would present a formidable global challenge.

These are, of course, imperfect numbers.  It may be weeks or even months before we have a reasonable grasp of the CFR and CAR (Case Attack Rate) of this virus - and even then - the impact seen in one part of the world may differ greatly from what is seen in other areas.


Regions with a decent public health infrastructure are more likely to see fewer cases, and better outcomes, than will low resource countries.

While it seems increasingly likely that COVID-19 will spread globally, how and how quickly that will happen remains unknown.
Posted by Michael Coston at 7:03 AM