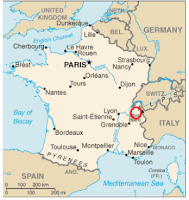 Although there is nothing yet posted on the French Ministry of Health website, multiple media sources are reporting on a press conference held by Health Minster Agnès Buzyn this morning announcing 5 new novel coronavirus cases identified in France.


The first case, identified last night, recently returned from a trip to Singapore on January 24th and apparently stayed at a two apartment Chalet in Haute-Savoie for four days with his family.  At least 5 members of this family have tested positive for the coronavirus in France (a 6th is hospitalized in the UK).

This is the latest in a series of cases (see here, here, and here) linked to recent travel to Singapore (see Singapore Raises Health Alert To Orange Over Coronavirus) where limited silent local transmission now appears to have been occurring since the last week of January.

Details on the family cluster from France are still limited, but we get the gist from the following (translated) report from Le Figaro.

Prime Minister Edouard Philippe is holding a meeting at noon this Saturday in Matignon.
By Le Figaro

" The initial case was reported to us last night, it is a British national returning from Singapore where he had stayed from January 20 to 23, " said Agnes Buzyn. He stayed in France from 24 to 28 January in a chalet in Contamines-Montjoie, in Haute-Savoie. In this chalet are two apartments. In the first, three people - including the initial case - were diagnosed " positive " and four others suffered from minor symptoms. In the second apartment, a father and his child were also infected. The mother, who was not present, was taken into hospital on British soil.

Posted by Michael Coston at 5:31 AM