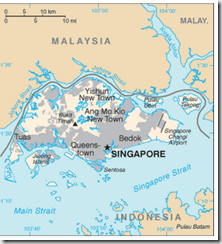 Not unexpectedly, we're  seeing more media reports this morning of local transmission of the novel coronavirus from several countries outside of China.  This is a trend that is only expected to increase in the days ahead.

First in the queue this morning is this announcement from Singapore's Ministry of Health.

As of 4 February 2020, 2 pm, the Ministry of Health (MOH) has confirmed six additional cases of 2019 novel coronavirus (2019-nCoV) infection in Singapore. Four of these cases involve human-to-human transmission in Singapore. Eighteen confirmed cases were earlier announced by MOH.

3. Though four of these cases constitute a local transmission cluster, there is as yet no evidence of widespread sustained community transmission in Singapore.

About the confirmed cases


Case 19
4. She is a 28 year-old female Singapore resident who has no recent travel history to China. She is currently warded in an isolation room at Singapore General Hospital (SGH).

5. She works at Yong Thai Hang at 24 Cavan Road, a complementary health products shop that primarily serves Chinese tourists. She reported developing sore throat and fever on 29 January, and sought treatment at a general practitioner clinic on the same day. On 30 January, she went to Tan Tock Seng Hospital’s emergency department, and was discharged when her chest x-ray came back negative for pneumonia. She reported that she had not left her home at Jalan Bukit Merah from 31 January to 2 February.

6. On 3 February, she went to Singapore General Hospital (SGH). As she was diagnosed with pneumonia this time, she was classified as a suspect case and immediately isolated. Subsequent test results confirmed 2019-nCoV infection on 3 February past 11pm.


7. She is a 48 year-old female Singapore resident who has no recent travel history to China. She is currently warded in an isolation room at the National Centre for Infectious Diseases (NCID).

8. She is a colleague of Case 19 and stays at Hougang Street 61. She reported onset of symptoms on 25 January.

9. On 3 February, she went to NCID. Given that she is a colleague of Case 19, she was classified as a suspect case and immediately isolated. Subsequent test results confirmed 2019-nCoV infection this morning.

10. She is a 44 year-old female Indonesian national who has no recent travel history to China. She is currently warded in an isolation room at SGH.

11. She is Case 19’s foreign domestic worker, and resides at Jalan Bukit Merah. She reported onset of symptoms on 2 February. As a close contact of Case 19, she was admitted to SGH emergency department on 3 February. Subsequent test results confirmed 2019-nCoV infection this afternoon.

12. She reported that she had not left her place of residence since onset of symptoms.

13. They are Singapore residents who were evacuated from Wuhan on 30 January. They were without symptoms when they boarded the flight, and were put under quarantine upon landing in Singapore.

14. As an added precaution, all Singaporeans evacuated from Wuhan were tested for 2019-nCoV. The two cases tested positive on 3 February despite continuing to show no symptoms. They are now warded in isolation rooms at NCID.

15. She is a 32 year-old female Singapore resident who has no recent travel history to China. She is currently warded in an isolation room at NCID.

16. The case is a tourist guide who had brought tour groups to Yong Thai Hang at 24 Cavan Road, the same shop of which cases 19 and 20 are employees. She was asymptomatic when she went to NCID on 3 February, where she was immediately isolated. Subsequent test results confirmed 2019-nCoV infection this afternoon.

17. In addition to the above cases, Malaysia has also announced this afternoon a case involving a 42 year-old male Malaysian national who was in Singapore from 16 to 23 January for a business meeting at Grand Hyatt Hotel, which involved Chinese nationals.

He had onset of symptoms after his return to Malaysia, and subsequently tested positive for 2019-nCoV on 3 February.

18. MOH has initiated epidemiological investigations and contact tracing to identify individuals who had close contact with the cases.


19. The four cases of local transmission (cases 19, 20, 21 and 24) were identified as a result of enhanced surveillance at our hospitals. Though this cluster constitutes limited local transmission, there is as yet no evidence of widespread sustained community transmission. Three of the four cases can be traced to contact with recent travellers from Mainland China, and had prolonged interactions with these travellers. Pending confirmation from the Chinese authorities, the travellers are from Guangxi, and at least two of them have since been confirmed with 2019-nCoV infection.

20. Singapore has been preparing for such clusters, and our measures implemented thus far have been directed towards preventing and containing the risk of spread beyond such local clusters to the broader community. As we have stepped up our surveillance, we expect to see more such local clusters in Singapore, including cases of local transmission.

21. The following enhancements will be implemented as an added precaution in view of the latest developments.

22. Current evidence suggests that the likely modes of transmission are mainly through contact with droplets from infected individuals, either directly or indirectly through hands that have come into contact with these droplets. The virus can also transmit through surface contact. The most effective method to prevent such transmission is through good individual personal hygiene, and social responsibility on the part of those who are unwell. Everyone should wash their hands regularly, avoid touching their faces, and stay home if they are unwell.

23. We must also pay more attention to keeping the environment around us clean. We have advised businesses and organisations to increase the frequency of cleaning, especially high-traffic premises such as food and beverage outlets, retail shops and hotels. Beyond this, we also urge individuals to play their part to keep their personal workspaces clean.

Heightened measures for the vulnerable

24. We have thus far taken a more cautious stance with vulnerable groups, including young children and the elderly. As an added precaution, our schools will be adopting additional measures to lower the risk of transmission among students and staff, including staggered recesses and suspension of school assemblies. Our pre-schools will suspend large group and communal activities.

26. We are also contacting individuals with profiles similar to the above four cases of local transmission, who have had recent close contact with individuals with travel history to Mainland China.

27. MOH has also expanded surveillance efforts to conduct 2019-nCoV testing on all individuals with pneumonia at our hospitals since last week.

Enhancements as part of calibrated efforts to evolving situation

28. We are closely monitoring the situation, and will calibrate our posture accordingly as new developments arise.

29. Our travel restrictions for those with travel history to Mainland China, and measures to place returned travellers under quarantine or leave of absence, will continue to help to contain the risk of spread.

30. It is possible that there could be broader community spread despite our best efforts. Should that happen, we will consider additional measures to reduce human-to-human interactions, such as cancelling mass gatherings, suspending schools, and paring down non-essential care services, to slow the spread of disease.


31. One of our earlier confirmed cases, Case 7, a 35 year old male Wuhan resident, has been discharged from NCID today. He has recovered, and has been comprehensively tested negative for the virus.