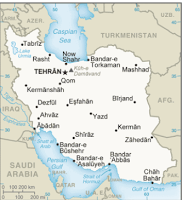 Based on the number of exported cases we've seen reported over the past week, the real number of cases in Iran is undoubtedly many times greater than is being reported, but official numbers are all we really have to go on.


State run media IRNA (Islamic Republic News Agency) is reporting this morning a jump of 143 confirmed cases, and 8 additional deaths over the past 24 hours, bringing Iran's totals to 388 cases and 34 fatalities.

The higher than normal mortality rate (currently 9%) that Iran has reported since the start of their outbreak is concerning, but may be artificially skewed if only the `sickest of the sick' are currently being tested and identified.

TEHRAN - IRNA - The Head of the Public Relations and Information Center of the Ministry of Health announced that: The number of confirmed cases of the new Coronavirus virus in the country increased by 143 new cases to 388. In the past few days 73 have improved and 34 have died.

He continued: The overall number of patients in Iran is 388.

Jahanpour said: The mean age of hospitalization was more than 50 years and the average age of death was over the sixty-0 years.

The Director of the Public Relations and Information Center in the Ministry of Health said: Today, the fifth meeting of the Anti-Coronavirus Headquarters was held with the presence of the first vice president.

Gen. Mohammed al-Askari. Eighty to 90 percent of progress is made in conjunction with CKRV, compliance with both individual and public health points, and strict recommendations on reducing trade and travel between cities and towns. Tours to some provinces is high. The road minister's report showed that Mazandaran province was one of the provinces with many more input automobiles than the output cars.

Jahanpour continued: As in the past days, we stress that there is no safer place than our homes and cities against the Coronavirus.

The Director of the Public Relations and Information Center in the Ministry of Health said: Government support measures and health systems are continuing in cooperation with other ministries and will be developed and we hope to reach the best point by increasing each other.

Posted by Michael Coston at 5:56 AM