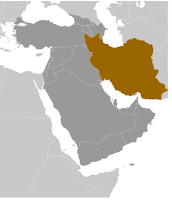 Yesterday Iran confirmed their first two COVID-19 Cases - both deceased - and at the time there were reports of up to 25 others in quarantine.  This morning (EST) Iran's Ministry of Health confirms 3 additional positive cases - 2 in Qom and 1 in Arak.

Director of public Relations and Information Center of Ministry of Health announced:


The head of public Relations and Information Center of the Ministry of Health regarding the last condition of the disease (19) in the country said: based on laboratory evidence, three of the hospitalized patients in Qom and Arak were approved to the 19th and the patients referred to in the hospital are currently in care.

Dr. Kianoosh Jahanpour said in an interview with WEBDA Reporter: Until this morning (Thursday 1 February 98) The experiments of two new cases in Qom and one case in Arak to the 19th of Iran have been mentioned, all three of the patients have an Iranian citizenship and the person suffering from Arak is also residing in Qom and from our physician.

He added: In this regard, this morning meeting with the Minister of Health and assistants of the Ministry and video communication with the directors of universities/faculties of medical sciences across the country was held and issues such as the prevention structure, identification and management of this disease as well as readiness of emergency medical centers and rapid reaction teams, hospital beds, general education and health protocol proposed by holding the second March elections were discussed.

Among the reports recently published by  IRNA (Islamic Republic News Agency) on their web page devoted to the breaking news: Corona in Iran; Latest News and Reports,  is this, with information on other suspected cases.

Note: This report does not include the 5th confirmed case from Arak, and contains some conflicting numbers (possibly translation artifacts).

TEHRAN - IRNA - The head of the Ministry of Health and Medical Education's Center for Infectious Diseases announced the confirmation of two more patients with the coronavirus in Qom and the transfer of five other suspected individuals from Qom to Tehran hospitals.

In addition to two coronary heart disease patients who died yesterday in Qom, two other patients were confirmed to be hospitalized in Qom and five were hospitalized, said Mohammad Mehdi Goya on Thursday in an interview with IRNA. Another suspect was transported to Tehran by ambulance and hospitalized in the capital. We are waiting for the results of their tests and they have not yet been confirmed.

He said: "The family and the relatives of two patients have died and two are not quarantined, but they have been given the necessary education and health advice to see if they have symptoms."

The head of the Department of Infectious Disease Management at the Ministry of Health and Medical Education said: "The people with the disease have been diagnosed with a new coronavirus, but we are investigating suspects and now in no other city. Coronary artery disease has not been reported.

He said: "There are no plans to close schools in Qom, but we are monitoring the situation and a new decision will be made if new conditions arise."

The head of the Department of Infectious Disease Management at the Ministry of Health continued: At today's meeting, the Corona headquarters also set up new committees, with the aim of avoiding exaggeration and disturbing public opinion. They provide information about Corona in Iran.

Posted by Michael Coston at 5:16 AM