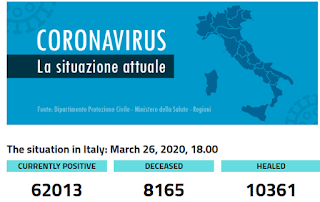 Italy, which will almost certainly surpass China in total number of confirmed COVID-19 cases in the next few hours - and has already reported more than twice as many deaths - has been under a strict nationwide lockdown for 16 days (18 days in Lombardy).


The expectation has been that after about 2 weeks of lockdown, we'd start to see a leveling off of cases, and hopefully the start of a gradual decline. And somewhat reassuringly, we've not set any new daily records set since the peak last Saturday (n=6,557)

Today, however, the downward trend we've been seeing the past five days has been reversed, with more than 6,000 new cases announced over the past 24 hours (n=6,153) - an increase of more than 900 over yesterday's total.  Another 662 deaths have also been reported.

We've seen unverified reports suggesting that some number of suspected COVID-19 related deaths have not been counted.  At the same time it is likely that a large number of mild or moderate COVID-19 cases have gone uncounted.

Regardless of the actual CFR, Italy's healthcare delivery system has been hammered by COVID-19. There are media reports that more than 3 dozen doctors have died from the virus - and more than 6,000 HCWs have reportedly been infected.

Media reports also suggest that a significant number of deaths have been attributed to lack of ICU beds, ventilators, and trained medical personnel, and that difficult triage decisions are being made in many hospitals every day (see Cold Calculations: The Realities Of Ventilator Triage).

Among the 62013 positives: Read the tables

Posted by Michael Coston at 2:22 PM