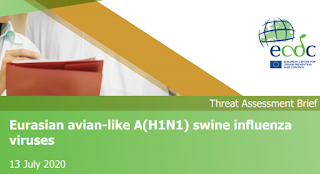 Specifically, this new study found the virus replicated well in human epithelial cells, can spread via respiratory droplets among ferrets, and  a seroprevalence study of swine workers found 10% (35/338) showed antibodies to this emerging strain.

While EA H1N1 has been cited as a top contender for sparking a future pandemic, it is far from the only swine flu virus we are watching. The CDC's IRAT (Influenza Risk Assessment Tool) lists 3 North American swine viruses as having pandemic potential (2 added in 2019).

And there are still others (see last week's WHO: Influenza A(H1N2) variant virus – Brazil) that have shown an ability to jump species around the globe.  In truth, global surveillance is so limited, there are probably many more than we know.

And as we've discussed many times before (see Are Influenza Pandemic Viruses Members Of An Exclusive Club?) - most swine influenza viruses are either H1, H2, or H3 - giving them a distinct advantage, as those are the only influenza subtypes known to have sparked a human pandemic in the last 130 years.

Nine days ago, in The CDC's Responds to the PNAS EA H1N1 `G4' Swine Flu Study, we looked at the steps the CDC was taking in light of the latest research on EA H1N1.  Those steps included:

Today we have a risk assessment authored by the ECDC on this emerging swine flu virus.

This virus demonstrated the ability to replicate in human epithelial cells and can spread through respiratory droplets between ferrets. Antisera against seasonal human A(H1N1)pdm09 virus showed poor reactivity with G4 viruses. In the same study, a subsequent serosurvey found that 10% (35/338) of swine farm workers were positive for this G4 EA A(H1N1) virus, with a higher proportion in people between 18 and 35 years of age (21%; 9/44).

These findings raise concern about the pandemic potential of these viruses, which are already able to replicate successfully in human tissue and transmit through droplets between ferrets, being a model for human-to-human transmission.

The reality is that H1, H2, and H3 swine flu viruses are not considered reportable animal diseases to the OIE - and like many others (H9N2, H6N1, H3N1, H10N8) - while they pose some  risk of human infection, are poorly tracked.

It's only when surveillance (which ranges from limited to non-existent) around the world picks up a human infection, or a research study is published, do we take notice.

Our track record of predicting which virus will spark the next pandemic is dismal, which is why we track so many threats.  And still - as with COVID-19  and the 2009 H1N1 pandemic - we often get hit by something from out of left field.
The full ECDC risk assessment is well worth reading - even if it can't quantify that risk - but below you'll find a snippet on the risks of this virus mutating and spreading among humans:

What is the risk of mutation and human-to-human transmission?

The emergence of new viruses, as experienced with SARS-CoV-2, or with the emergence of the highly pathogenic avian influenza virus A(H7N9) mutation, new genetic variants, and their epidemiological characteristics in humans and other animals are still unpredictable. The factors that drive the processes are not fully understood as also individual host factors play a strong role.

Surveillance and data collection for diseases with mild clinical signs or which are asymptomatic in domestic animals are limited. This is similarly true for mild diseases in humans and a small cluster of human-to-human transmission associated with mild symptoms might be challenging to be detected through the regular sentinel surveillance systems.
However, human cases with swine influenza variant virus infection are detected sporadically through routine surveillance as has been described recently in Brazil, with the report of a human cases of A(H1N2) variant virus. The 22-year-old female slaughterhouse worker presented with influenza-like illness (ILI) on 12 April 2020 and the A(H1N2) variant virus was identified through routine surveillance and sharing of the isolate with the national influenza centre.

This underlines the importance to test patients with ILI also for influenza, and in case the virus is untypable, to share with specialised laboratories for further characterisation [41]. A retro- and prospectiveinvestigation at the site identified another possible case with similar ILI symptoms during the same time period.

For some previous blogs on swine influenza in China, you wish to revisit:

PLoS One: Continuous Evolution of Influenza A Viruses of Swine from 2013 to 2015 in Guangdong, China

J.O.I. : A Human Infection with a Novel Reassortant H3N2 Swine Virus in China