ECDC: Risk Assessment of New SARS-CoV-2 Variants of Concern in the EU/EEA 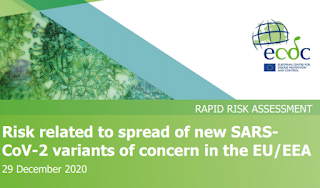 Like everyone else, the ECDC is trying to assess the added risk posed by the emergence and spread of the UK and South African COVID variants that have been in the news the past two weeks.

This 26-page PDF report provides a good deal of background and epidemiological data on the rise of these two variants.  The Epi Curve below from South Africa shows the rapid increase in cases during the past two months, in what is their late spring and early summer. 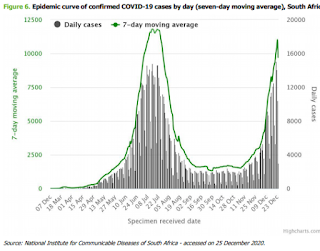 As with other reports we've seen, preliminary data suggests these variants may be more easily transmitted and earlier strains, but so far there is no evidence that these variants produce greater morbidity or higher mortality.   Investigations continue.

Most will want to download and read the full report, but I've posted the executive summary below.

European Centre for Disease Prevention and Control. Risk related to spread of new SARS-CoV-2 variants of concern in the EU/EEA – 29 December 2020. ECDC: Stockholm; 2020.

This risk assessment presents the latest available information on the recent emergence of two variants of potential concern, VOC 202012/01 discovered in the United Kingdom (UK) and another variant, 501.V2 identified in South Africa. It also assesses the risk of these variants of concern being introduced and spread in the EU/EEA, as well as the increased impact this would have on health systems in the coming weeks.
Executive summary

Viruses constantly change through mutation, and so the emergence of new variants is an expected occurrence and not in itself a cause for concern; SARS-CoV-2 is no exception. A diversification of SARS-CoV-2 due to evolution and adaptation processes has been observed globally.

While most emerging mutations will not have a significant impact on the spread of the virus, some mutations or combinations of mutations may provide the virus with a selective advantage, such as increased transmissibility or the ability to evade the host immune response. In such cases, these variants could increase the risk to human health and are considered to be variants of concern.

The United Kingdom (UK) has faced a rapid increase in COVID-19 case rates in the South-East, the East and the London area, which is associated with the emergence of a new SARS-CoV-2 variant, VOC 202012/01. As of 26 December 2020, more than 3 000 cases of this new variant, confirmed by genome sequencing, have been reported from the UK. An increasing proportion of cases in the South East, the East and the London area are due to this variant, but cases have also been identified in other parts of the UK. Although it was first reported in early December, the initial cases were retrospectively identified as having emerged in late September. Preliminary analyses indicate that the new variant has increased transmissibility compared to previously circulating variants, but no increase in infection severity has so far been identified.

In addition to VOC 202012/01, South Africa has reported another SARS-CoV-2 variant, designated as 501.V2, which is also of potential concern. This variant was first observed in samples from October, and since then more than 300 cases with the 501.V2 variant have been confirmed by whole genome sequencing (WGS) in South Africa, where it is now the dominant form of the virus. Preliminary results indicate that this variant may have an increased transmissibility. However, like the VOC 202012/01, at this stage there is no evidence that 501.V2 is associated with higher severity of infection.

ECDC assesses that the probability of SARS-CoV-2 VOC 202012/01 and 501.V2 being introduced and further spread in the EU/EEA is currently high. Although there is no information that infections with these strains are more severe, due to increased transmissibility the impact of COVID-19 disease in terms of hospitalisations and deaths is assessed as high, particularly for those in older age groups or with co-morbidities. The overall risk associated with the introduction and further spread of SARS-CoV-2 VOC 202012/01 and 501.V2 is therefore assessed as high.

Member States are recommended to continue to advise their citizens of the need for non-pharmaceutical interventions in accordance with their local epidemiological situation and national policies and, in particular, to consider guidance on the avoidance of non-essential travel and social activities.

Options for delaying the introduction of variants of concern

The options available for delaying the introduction and further spread of a new variant of concern are:
Although in the short-to-medium term the roll-out of vaccinations will probably contribute to the response, these immediate measures are essential until such time as doses are available in sufficient numbers and have been shown to have a mitigating effect.
Increased detection and characterisation

Member States should continue to monitor for abrupt changes in rates of transmission or disease severity as part of the process of identifying and assessing the impact of variants. Data analysis and assessment of the local, regional and national situation should be performed to identify areas with rapidly changing epidemiology.

National public health authorities should notify cases of the new variant, as well as any other new SARS-CoV-2 variants of potential concern, through the Early Warning and Response System (EWRS) and The European Surveillance System (TESSy) for case-based surveillance and aggregate reporting, which has been adapted for this purpose.

In order to be able to detect introductions of known variants, as well as emergence of new variants of concern, Member States need to perform timely genome sequencing of a significant and representative selection of isolates. The UK has demonstrated that their sequencing programme is able to detect emerging variants. Ideally, Member States should aim for a similar timeliness and fraction of samples sequenced, although this will depend on the availability of resources. If representative sequencing on a similar scale to that carried out by the UK is not feasible, samples could be selected where the involvement of a variant of concern is suspected.
Risk related to spread of new SARS-CoV-2 variants of concern in the EU/EEA - EN - [PDF-1.25 MB]