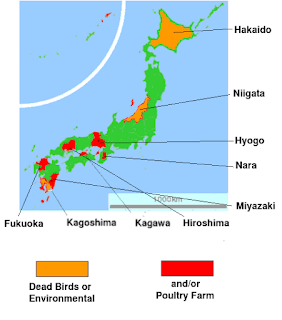 Japan's avian epizootic continues to ramp up, with two new poultry farms in Miyazaki Prefecture testing positive, involving over 100,000 birds.  The two farms are about 25 km apart, and both are located within 10 km of 3 to 4 million farmed birds raised on dozens of farms.

While avian flu activity globally has been greatly suppressed since the summer of 2017, over the past 90 days we've seen a resurgence - both in Asia and Europe/Russia - along with the emergence of a `genetically distinct' strain of HPAI H5 into Europe (see Pre-Print: Novel Incursion of a HPAI H5N8 Virus in the Netherlands, October 2020).

We've three reports this morning.  Two from Japan's Ministry of Environment and one from South Korea's Ministry of Agriculture (MAFRA).

On December 8, 2nd year of Reiwa, it was reported that a pseudo-patient with highly pathogenic avian influenza, which was the 19th case in domestic poultry, was confirmed at a meat chicken farm in Kobayashi City, Miyazaki Prefecture. In response to this report, we will strengthen the monitoring of wild birds by designating the area within a radius of 10 km around the outbreak farm as a priority area for wild bird monitoring.

December 7th (Monday)
・ Miyazaki Prefecture received a report that the number of dead chickens increased, and refrained from moving to the farm ( located within a radius of 3 km from the 15th and 18th domestic farms that occurred in Miyazaki Prefecture this year ). And on-site inspection of the farm.
・ A simple influenza test was conducted on the chicken and the result was positive.
Tuesday, December 8
・ As a result of genetic testing of the chicken, it was confirmed that it was a H5 subtype and was a pseudo-patient with highly pathogenic avian influenza.

On December 7, 2nd year of Reiwa, it was reported that a pseudo-patient with highly pathogenic avian influenza, which was the 18th case in domestic poultry, was confirmed at a meat chicken farm in Miyakonojo City, Miyazaki Prefecture. In response to this report, we will strengthen the monitoring of wild birds by designating the area within a radius of 10 km around the outbreak farm as a priority area for wild bird monitoring.

・ Miyazaki Prefecture conducted a genetic test on the 15th case of highly pathogenic avian influenza in Japan on December 3 at a poultry farm in Miyakonojo City, and found that it was not subject to movement restrictions. Turned out.
・ As a result of an on-site inspection by Miyazaki Prefecture, clinical symptoms were confirmed, so it was confirmed that the patient was a pseudo-patient with highly pathogenic avian influenza.

While HPAI H5N8 - which as been confirmed in all of the previous outbreaks in Japan this fall - is not considered a serious human health concern, the virus can be devastating to both poultry and wild birds.
Meanwhile, in South Korea, the large quail farm mentioned in yesterday's blog which was suspected of being infected with HPAI H5, has been confirmed by MAFRA.

O The median this is a suspicious report received from its farms liver test results, and training is conducted proactive preventative measures such as movement restrictions on viewing the immediate farm access control and dynamics related to farms and facilities,

□ As for the heavy water plant, the following reinforced quarantine measures are implemented as highly pathogenic avian influenza is confirmed on the farm.

③ Restriction of movement for 7 days for all poultry farms in Eumseong-si, Chungbuk, the originating area

□ Emphasized that “the risk of occurrence is very high if the source of virus contamination is spreading nationwide, mainly in migratory birds, and the actual conditions of disinfection and quarantine of the farm are insufficient.”

ㅇ “The farmer says that I protect my livestock. With resolution, he asked for thorough disinfection of all vehicles, people, equipment, and goods entering the farm.

Given the intensity of the spread in Asia and Europe it would not be surprising to see a further expansion of activity along the migratory flyways that reach into Africa and the Middle East, and potentially, even into North America. 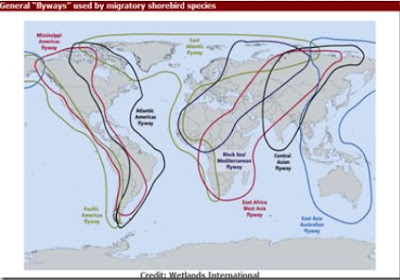 Which means that while it is currently Europe and Asia who are battling another avian epizootic, we in North America are far from immune. The USDA has some advice on how to Defend The Flock at the website below. 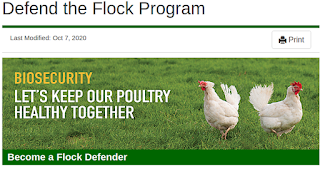 Posted by Michael Coston at 5:48 AM