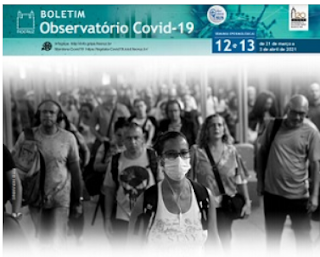 The most recent Bulletin of the Covid-19 Fiocruz Observatory (April 10th) examines the shifting age demographics of Brazil's second pandemic wave over the past 3 months  - and predicts the South and Midwest part of the country to be at greatest risk in the weeks ahead.

We saw early signs of this growing impact to a younger cohort two weeks ago, in Preprint: Sudden Rise In COVID-19 Case Fatality Among Young & Middle Aged Adults - Paraná, Brazil, which reported more than a 3-fold increase in deaths among COVID cases aged 20 to 29, compared to January, while deaths among those aged 30 to 49 roughly doubled.

We've been monitoring this devastating second COVID wave in Brazil - and the concurrent rise of a new, more aggressive SARS-CoV-2 variant B.1.1.28.1 (P.1) - since early January.

A January technical report from FIOCRUZ (Fundação Oswaldo Cruz) found that the P.1 variant had rapidly overtaken all other variants in the region, jumping from 51% of all sequenced samples in December to 91% by the first half of January.

While the impact of the P.1 variant outside of Brazil remains limited, it is increasingly being detected around the world, sparking concerns that what is happening in Brazil today may spread to other regions.

We have the summary report from FIOCRUZ on yesterday's bulletin, followed by a link and some (translated) excerpts from the full (14-page) report.

Covid-19: South and Midwest tend to be critical in the coming weeks

Responsible for the Bulletin, the researchers from the Covid-19 Fiocruz Observatory found that the age group of 20 to 29 years old, which during Epidemiological Week (SE) 10 had an increase lower than the global increase (256%), after an update of the data, passed to show growth of 876% in that week (March 7 to 13). Now in the most recent analysis (SE 12), the growth was 740.80%, also higher than the global average (701.58%).

The highest incidence rates for Covid-19, as shown in the Bulletin, were observed in the states of Rondônia, Amapá, Tocantins, Espírito Santo, Santa Catarina, Rio Grande do Sul, Mato Grosso and the Federal District.

The highest mortality rates were found in the states of Rondônia, Tocantins, São Paulo, Paraná, Santa Catarina, Rio Grande do Sul, Mato Grosso do Sul, Mato Grosso, Goiás and the Federal District. This pattern places the South and Midwest regions as critical for the coming weeks, which can be aggravated by the saturation of the health system in these states.

As for immunization, the researchers note that Brazil is still far from the values ​​necessary for the country to have “a situation of greater control”. The first doses of vaccines were made available by the National Immunization Program (PNI), up to the period under review, for 13% of the population over 18 years of age and the second doses for only 3.68%.

As an example of good solutions against the advance of the pandemic in Brazil, the analysis shows the blockade measures adopted in Fortaleza, in the metropolitan region of Salvador and in the municipality of Araraquara. The positive impacts of these measures in countries like Italy and Spain are also cited in the document.

Coping with the pandemic

According to the Bulletin, multiple factors contributed to this new level of the pandemic. To face the current scenario, the researchers emphasize that it is essential to combine different measures, involving non-pharmacological measures, the health system and protection and social assistance policies and actions to reduce vulnerability and social impact.

“There is a need for convergence and integration of the different powers of the Brazilian State (Executive, Legislative and Judiciary), as well as the different levels of government (municipal, state and federal), with the participation of companies, institutions and civil society organizations (of local to national level) to face this very critical and serious moment of the pandemic ”, they warn.

The full FIOCRUZ bulletin is published in Portuguese, but I've excerpted and translated a small portion below, which indicates deaths in those under the age of 60 have increased at roughly double the global rate since the first week of January in Brazil. 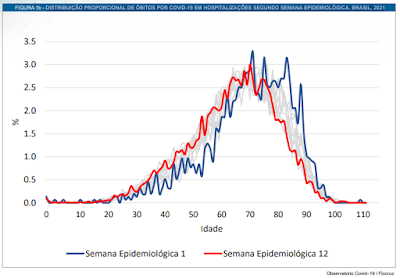 PROPORTIONAL DISTRIBUTION OF DEATHS BY COVID-19 IN HOSPITALIZATIONS ACCORDING TO EPIDEMIOLOGICAL WEEK. BRAZIL, 2021

Four months ago, the assumption was that Brazil's first wave, during the spring of 2020, left enough community immunity behind to prevent a second major pandemic wave.  Seroprevalence studies showed - at least in some regions - that `herd immunity' had already been theoretically achieved.

Then came December 2020 - and the emergence of the P.1 variant - and suddenly Brazil found itself in the midst of its worst COVID wave to date (see The Lancet: Resurgence of COVID-19 in Manaus, Brazil, Despite High Seroprevalence), with many who had been previously infected apparently reinfected in this second wave.

A reminder of how quickly a new, aggressive, variant can change the trajectory of this pandemic, and a warning not to let our guard down prematurely, since the P.1 variant has already been reported in 28 states in the U.S., and in more than 3 dozen nations around the world.

Posted by Michael Coston at 7:51 AM