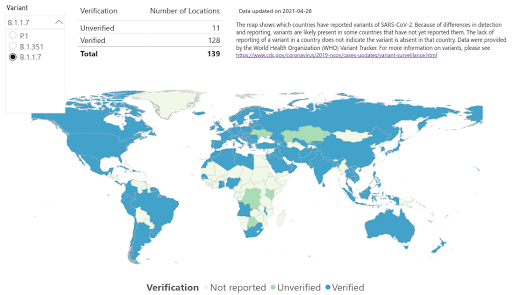 Four and a half months ago the UK announced their first `variant of concern', which was dubbed VOC-202012/01 in the UK, and better known as lineage B.1.1.7 internationally.  In the 150 days since then, B.1.1.7 has become the dominant variant in the UK, the United States, and Denmark (among others), and has spread to at least 139 countries.

In the United States the CDC currently tracks hundreds of variants, but has designated 8 variants as either VOCs (Variants of Concern) or VUIs (Variants of Interest). A third category - VHC (Variant of High Consequence) - remains empty for now.

Meanwhile the UK, which still leads the world in genomic testing and surveillance, has continued to discover and classify new VOCs and VUIs, many of which were first identified in other countries.

Two weeks ago, in UK PHE COVID Variant Update - Adds 11th Variant (VUI-21APR-01) To Watchlist, we saw the addition of the B.1.617 variant linked to India.

Yesterday the UK announced the addition of two more variants to their list, both apparently offshoots of the B.1.617 variant. Despite the recent dire news coming out of India, it isn't yet clear whether these new variants are more dangerous than others, and so all three are considered Variants Under Investigation (VUIs) for now.

Public Health England (PHE) releases weekly updates on the number of confirmed new cases of variants of concern and variants under investigation identified in the UK.

The dominant variant continues to be VOC-20DEC-01 (B.1.1.7) and PHE will continue to monitor all variants closely. The best way to stop the spread of the virus is to remember: hands, face, space and follow the restrictions in place.

Two variants have been designated Variants Under Investigation by PHE.

VUI-21APR-01 was designated a Variant Under Investigation in April. The variant is from the B.1.617 lineage – a distinct fingerprint of genetic mutations. We have also identified cases of 2 additional variants, which are part of the same lineage and so are genetically similar.

While closely related, their genetic profiles are different and have been designated as separate Variants Under Investigation so that we can track them properly and take fast public health action as needed.

There is currently no evidence that these variants cause more severe disease or render the vaccines currently deployed any less effective. PHE is carrying out increased laboratory testing, in collaboration with international partners to better understand the impact of the mutations on the behaviour of the virus and to ensure all appropriate public health interventions are taken.

Identified case numbers remain low and are geographically dispersed in England. Where cases have been identified, additional follow up of cases, testing of contacts and targeted case finding will be used to limit the spread of these variants.

PHE has identified:
All appropriate public health interventions will be undertaken, including additional contact tracing and targeted testing.

While the UK maintains one of the most extensive variant watch lists in the world, most of these variants will never become more than minor players, or footnotes in COVID's history book.

Only those variants that have a substantial `fitness' advantage - primarily either increased transmissibility or `reduced antibody recognition' - are likely to become true contenders.

But there are a lot of variables at work here, including shifting community immunity (due to natural infection of vaccination), and it isn't obvious which of these variants - if any - will have a fitness  advantage going forward. 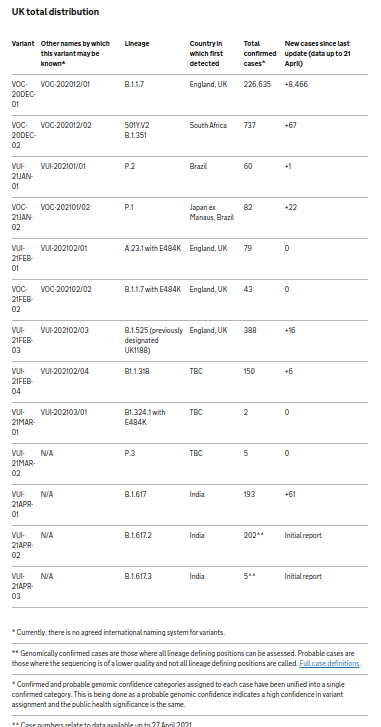 Posted by Michael Coston at 7:43 AM