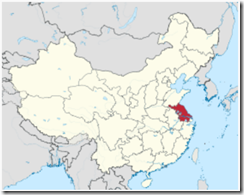 Eastern China has long had the reputation as being the `cradle of influenza' (see Viral Reassortants: Rocking The Cradle Of Influenza), primarily because human, avian, and swine influenza viruses circulate there more-or-less year round, population densities are very high, and because humans and farm animals there often have opportunities to come in close contact.

China is regarded the birthplace of HPAI H5N1 in the mid 1990s, and most researchers believe that 2 of the 3 major influenza pandemics of the last century (1957's Asian Flu, 1968's Hong Kong Flu) originated from that region (not to mentions SARS & SARS-CoV-2).

In recent years, the number of novel flu viruses coming out of China has accelerated, with H7N9 emerging in 2013 - followed by H10N8 - both of which have infected and killed humans. In 2014, two more avian flu viruses - H5N6 and H5N8 - emerged, both of which also have a record of infecting humans.

In the spring of 2013  a study (see EID Journal: Predicting Hotspots for Influenza Virus Reassortment) identified 6 key geographic regions where reassortments are likely to emerge.

And high on that list (you guessed it), was Eastern mainland China.

So it doesn't come as an absolute shock that overnight Chinese authorities have announced the first known human infection with an avian H10N3 virus (h/t Gert van der Hoak at FluTrackers : Thread).

China's National Health Commission has released the following (translated) statement, after which I'll have more.

The patient, male, 41 years old, now lives in Zhenjiang, Jiangsu. April 23 appeared fever and other symptoms , April 28 exacerbations income to local medical facilities for treatment. At present, the patient's condition is stable and basically meets the discharge standard. On May 28th, the Chinese Center for Disease Control and Prevention conducted a whole genome sequence determination of the patient specimens sent from Jiangsu Province , and the result was positive for the H10N3 virus. Jiangsu Province, for all close contacts were under medical observation, carried out at the local emergency monitoring, have found no abnormalities .

The National Health Commission has instructed Jiangsu Province to carry out prevention and control in accordance with relevant plans, and organized expert risk assessments. Experts assessed that the whole gene analysis of the virus showed that the H 10 N 3 virus was of avian origin and did not have the ability to effectively infect humans. No human cases of H10N3 have been reported globally , and the H10N3 virus among poultry is low pathogenic to poultry . The once occasional outbreak of avian to human spread across species, large-scale spread of epidemic risk extremely low.

Experts suggest that the public in their daily lives should avoid contact with sick or dead poultry, try to avoid direct contact with live birds; attention to food hygiene , improve self-protection awareness, appear fever and respiratory symptoms should wear a mask, just as soon as doctors .

Human infection with novel flu viruses undoubtedly occur more often than we know, since most cases of influenza are mild or moderate, and most people never seek medical care. And even among those who do see a doctor, the sort of testing required to identify a novel virus is only rarely done.

But this is the first known infection with H10N3, and so if it has happened before, it probably hasn't happened terribly often. While we tend to worry most over H5 and H7 avian influenza viruses - due to their enhanced virulence in human hosts - we have seen human infections with H10 viruses in the past, including fatal ones (H10N8).

We aren't given a lot of detail about the condition of this first H10N8 case, but the press release suggests that he is still in the hospital more than a month after falling ill, making this more than a trivial infection.

In 2004 the first known human H10 infections (see Avian Influenza Virus A (H10N7) Circulating among Humans in Egypt) were reported, followed in 2012 by a limited outbreak among workers at a chicken farm in Australia (see in EID Journal: Human Infection With H10N7 Avian Influenza).

Most of these avian flu infections were mild or asymptomatic, and self limiting. Often only producing conjunctivitis or mild flu-like symptoms.

But in late 2013 a new H10N8 virus emerged in Mainland China (see Lancet: Clinical & Epidemiological Characteristics Of A Fatal H10N8 Case) infecting three people, killing at least two.While the number of reported H10 infected humans remains small - possibly due to a lack of surveillance and testing - in 2014's BMC: H10N8 Antibodies In Animal Workers – Guangdong Province, China, we saw evidence that people may have been infected with the H10N8 virus in China before the first case was recognized.Although today's case is the first human H10 infection we've seen reported since early 2014, these avian viruses continue to turn up in aquatic mammals, often producing significant mortality (see PLoS One: Pathology Of A/H10N7 In Harbor Seals).

The biggest incident was in northern Europe (mostly Denmark and Germany & Sweden) in 2014, when as many as 3,000 harbor seals reportedly died from avian H10N7 (see Avian H10N7 Linked To Dead European Seals), prompting warnings to the public not to touch seals.

In 2016 the journal PLoS One published an article that evaluated the virus's zoonotic potential through experimentally inoculated ferrets.

In addition to finding that secondary bacterial pneumonia contributed heavily to seal mortality in this outbreak, the authors found that ferrets `. . . were susceptible to infection and developed respiratory disease, which suggests that Seal/H10N7 is potentially virulent for human beings.'

The full study is available online, at Influenza A (H10N7) Virus Causes Respiratory Tract Disease in Harbor Seals and Ferrets.

More recently, in 2019's JVI: Aerosol Transmission of Gull-Origin Iceland Subtype H10N7 Influenza A Virus in Ferrets, we saw a study where researchers found a the H10N7 virus `. . . showed high binding affinity to human-like glycan receptors. . . ', prompting the authors to recommend that avian H10 viruses be monitored closely, as they have some pandemic potential.

Whether today's announcement is a one-off event, or the first in a series of H10N3 infections, only time will tell.  We've been here before with other novel viruses, and have seen it go both ways.

But this is another reminder that nature's laboratory is open 24/7, and new viral challenges will continue to emerge around the globe. Most will sputter, and fail to thrive. But eventually, another pandemic virus will appear.
Hopefully when that next pandemic threat does emerge, we'll face it far better prepared than we were for COVID-19.
Posted by Michael Coston at 7:02 AM