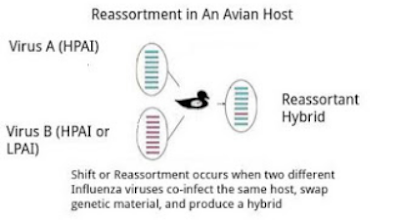 Although long plagued by sporadic outbreaks of (mostly low path) avian flu, in 2015 Taiwan saw the arrival of at least 3 new HPAI strains of H5.  From the January 2015 OIE Notification On Taiwan’s `New’ HPAI H5N2:

Almost certainly brought in by migratory birds - the highly promiscuous H5N8 virus quickly reassorted with local avian influenza viruses and produced new versions of H5N2, along with a reassorted H5N3. 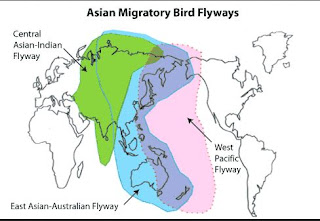 Although it is too soon to know how much of an impact it will have, today Taiwan's BAPHIQ (Bureau of Animal Plant Health Inspection & Quarantine) reports the detection of a new strain of HPAI H5N2 avian flu, discovered last week in Yunlin county.

A new type of H5N2 subtype avian influenza has been detected in dead ducks beside Yunlin Road. The Bureau of Inspection and Quarantine: Ask poultry farmers to strengthen and implement epidemic prevention
110-08-19

The Animal and Plant Disease Prevention and Quarantine Bureau (Bureau of Inspection and Quarantine) stated today (19) that the Animal Health Laboratory notified that dead ducks abandoned on August 11 beside the Mailiao Industrial Road in Yunlin detected a new H5N2 subtype highly pathogenic avian influenza virus, please Poultry farmers must be vigilant and strengthen the biosafety protection of poultry farms to prevent virus invasion.

The Bureau of Inspection and Quarantine stated that the new H5N2 subtype highly pathogenic avian influenza virus was detected this time. The H5 subtype gene is similar to the H5N8 subtype virus detected in wild bird and poultry farms in Korea in the winter of 2020 and early this year. The similarity is 99.2%; the N2 subtype gene is similar to the 2020 Hokkaido wild avian influenza virus strain, and the genetic similarity is 98.9%. The HA gene and NA gene show that this virus is completely different from the H5N2 avian influenza virus strain circulating in Taiwan's poultry farms. It is a new virus strain.
The Yunlin County Animal and Plant Epidemic Prevention Station (Epidemic Prevention Station) has recently conducted a comprehensive inspection of poultry farms within a radius of 3 kilometers from the detection site. So far, no cases of poultry farms with the virus have been found. However, H5N5 subtype highly pathogenic avian influenza was detected in one of the meat duck farms. According to standard operating procedures, the epidemic prevention station carried out the culling and destruction of 2,402 7-week-old meat ducks in the farm, and supervised the industry to complete the cleaning and disinfection of the farm. . A total of 13 cases of bird flu have been diagnosed and culled in poultry farms since 110 (5 land poultry farms, 7 geese farms, and 1 duck farm).

The Bureau of Inspection and Quarantine urges poultry farmers that the new H5N2 subtype avian influenza virus found so far has not yet been found in local poultry farms. The poultry farms should follow the "H5, H7 subtypes of poultry influenza prevention and control measures" announced by the local county and city government. Implement various biosecurity tasks in poultry farms to prevent the invasion or occurrence of avian influenza epidemics. If a poultry farm is found to be inconsistent with the previous prevention and control measures, it will be fined up to NT$150,000 and improved within a time limit according to the regulations. If no improvement is made by the deadline, if highly pathogenic avian influenza is detected in the poultry on the farm, the poultry will be culled , According to regulations, no compensation will be given.

Admittedly, this detection may prove to be a flash in the pan, or only of concern to local poultry interests, but it is a reminder that HPAI H5 viruses are continually evolving, reassorting, and spreading around the globe,
Last May, in  Science: Emerging H5N8 Avian Influenza Viruses, we looked at a review by two well-respected Chinese scientists (Weifeng Shi and George F. Gao)  on the evolution, and growing zoonotic threat, of avian H5N8, stating:
And in June, in V. Evolution: Genomic Evolution, Transmission Dynamics, and Pathogenicity of Avian H5N8 Viruses Emerging in China, 2020, we saw Chinese researchers describe the rapid rise in 2020 of an antigenically distinct H5N8 virus that is lethal to chickens and mice, that is similar to the Russian Zoonotic strain, and has shown signs of mammalian adaptation.

We are rapidly approaching the start of the fall-winter `avian flu season' in the Northern hemisphere. While no one can predict what this year's migration will bring, the potential is always there for another major epizootic (or worse).

Which is why we monitor these types of reports with considerable interest.