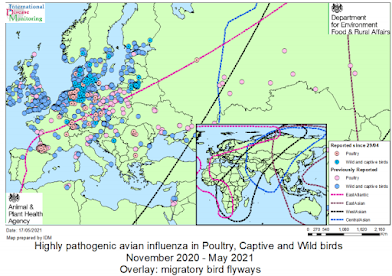 Since it emerged with a vengeance in South Korean poultry in January of 2014, we've been watching the evolution and global spread of the H5N8 avian flu virus. A cousin of the zoonotic - but fading - H5N1 virus, H5N8 until recently was thought incapable of infecting humans and only a threat to wild birds and poultry.

Viruses change over time - through antigenic drift (replication errors) and antigenic shift (reassortment) - and there have been warnings that H5N8 could evolve into zoonotic virus.

Perhaps most telling of these came in September of 2017 in J. Virulence : Altered Virulence Of (HPAI) H5N8 Reassortant Viruses In Mammalian Models, which found:

Taken together, our study demonstrates that a single gene substitution from other avian influenza viruses can alter the pathogenicity of recent H5N8 viruses, and therefore emphasizes the need for intensive monitoring of reassortment events among co-circulating avian and mammalian viruses.

Also in 2017, we looked at a J. Virulence Editorial: HPAI H5N8 - Should We Be Worried?, which reviewed and summarized the literature, and found enough reasons to be concerned over the future evolutionary path of H5N8, stating that:

The extensive distribution of HPAI H5N8, as well as the gene reassortment with other circulating avian viruses already observed for H5N8 suggests there is a potential risk for human cases of H5N8 infections.

Again, in 2018, we saw a study (see Virology: The Zoonotic Potential Of Multiple Subgroups of Clade 2.3.4.4. H5N8 Virus) that warned of the potential for H5N8 to adapt into a more `mammalian' virus.  Some highlights from their report include:

Not every study agreed. Also in 2018, in Emerg. Microbes & Infect.: Low Zoonotic Potential Of Clade 2.3.4.4B H5N8 Virus researchers argued that the recently evolved ". . . H5N8B is avian-adapted with augmented virulence for waterfowl, but has low zoonotic potential."

But between the two-decade track record of H5N1 occasionally jumping to, and often killing, humans and the emergence of a clearly zoonotic H5N6 virus in China (see HK CHP Notification: Fatal Human Case of Avian H5N6 In Guangxi Province, China), H5N8 has been viewed as having at least some pandemic potential.

While H5N8 has picked up increased virulence over the years - particularly in wild birds - and has sparked major epizootics in the Americas, Europe, Asia, and even South Africa, until earlier this year we never had confirmation of human infection with this particular subtype.

Since that announcement, we've see confirmation by the WHO and a risk assessment by the ECDC, both of which determined the risk of human infection to be low or very low.

As mentioned earlier, all the seven cases with PCR-positive results were clinically asymptomatic. All close contacts of these cases were clinically monitored, and no one showed signs of clinical illness. Infections with avian influenza viruses of the same clade (H5 clade 2.3.4.4) have been reported from China since 2014 in people with exposure to infected birds. The likelihood of human infections with influenza A(H5N8) viruses has been considered to be low.

While the ECDC stating:

This assessment is based on very limited data and there is therefore considerable uncertainty regarding the conclusions reached. The risk of infection related to avian influenza influenza A (H5N8) virus for the general public is assessed as very low, and for occupationally exposed people as low.

And just over two weeks ago, in the CDC Adds Zoonotic Avian A/H5N8 To IRAT List, we looked at their assessment of the pandemic potential of this virus, scoring it in  ". . . the lower to middle range of the moderate risk category, (which ranges from 4.0 to 7.9)."

We are, of course, still learning about the infections in Russia, and avian flu surveillance has taken a backseat to the coronavirus pandemic in many regions, making H5N8's evolution difficult to track. Exactly how big a threat H5N8 really is - or is likely to become - is difficult to say.

Attempting to quantify those risks, we've a new perspective, published in Science by two highly respected Chinese researchers who should be well known to long-time readers of this blog; Weifeng Shi and George F. Gao.

Their article begins with detailed, but remarkably easy-to-read history of HPAI H5  viruses, going back to Scotland in 1959, HPAI H5N1's emergence in China in 1996, and evolution, spread, and divergence into other subtypes (H5N6, H5N8, etc.) since.

It doesn't address H5N8's jump to humans in Russia until every near the end (likely because data is still emerging on that incident), but the authors express deep concerns over this development, stating that:

You can read the full perspective at the link below.  I'll have a brief postscript when you return.

While policy makers tend to view pandemics as rare events that come around every 30 to 40 years (and hopefully not on their watch) - and have been known to kick the pandemic-preparedness can down the road rather than deal with it - recent (and past history) suggests pandemics come around more often than is commonly believed.

In April of 2019, on the 10 year anniversary of the start of the 2009 H1N1 pandemic, we looked at pandemic frequency, in The CDC & Novel Flu Investigations. In it, I cited 3 times in just over the past century that pandemics (or pseudo pandemics) had occurred with gaps of 11 years or less between them.

As we've discussed previously, we only know the subtypes of influenza that have circulated in humans since early in the last century, but historic accounts suggest at least a dozen `influenza-like’ pandemics occurred in the 400 years prior to the 20th century.
Although some of these dates are a bit fuzzy, there are several instances where pandemics appear to be separated by fewer than 10 years. Making the notion that we don't have to worry for decades for the next pandemic to emerge clearly erroneous.

While the last thing anyone want to hear is that we need to be preparing for the next pandemic now, even as we are hip-deep in COVID-19, the reality is we could get blindsided at any time by another emerging virus.

Despite years of warnings (see partial list below) the world went into the COVID-19 pandemic largely unprepared, and has paid a heavy price both in lives lost and severe economic and societal disruptions.

DNI: An Influenza Pandemic As A National Security Threat

Few listened - and acted - then, and I suspect few are in the mood to listen now.

According to the work of anthropologist and researcher George Armelagos (May 22, 1936 - May 15, 2014) of Emory University, we are living in the  The Third Epidemiological Transition, an age of newly emerging infectious diseases, re-emerging diseases and a rise in antimicrobial resistant pathogens.

Whether HPAI H5N8 turns out to be the next global public health crisis, or we see a different influenza subtype,another coronavirus, a novel orthopoxvirus, or something altogether unexpected, the odds are something nasty, and unexpected, will emerge.  Perhaps sooner than anyone expects.

And when that happens, the only thing we will have any control over is our ability to respond.

That is, assuming we go in prepared to deal with it.
Posted by Michael Coston at 8:55 AM