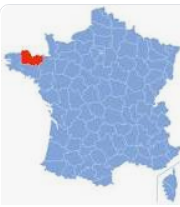 #16,177
On the heels of yesterday's FluView report on 2 More Novel Flu Cases Reported in Iowa we have the following report from Santé Publique France of that country's first confirmed human infection with swine variant H1N2v influenza.

Suspicion of a case of human influenza by an influenza A (H1N2) v clade 1C.2.4 virus of porcine origin in Brittany

Following the detection of a human case of infection by an influenza virus of porcine origin in the Côtes d'Armor, investigations are underway and a course of action has been developed by Public Health France in order to detect any possible case. infection with this virus and allow appropriate control measures to be put in place.

On 03/09/2021, the National Reference Center for Respiratory Infections Viruses at the Pasteur Institute confirmed an infection in a man residing in the Côtes-d'Armor, by an influenza A (H1N2) v clade 1C virus. 2.4 of porcine origin. This is the first detection in humans of this virus in France.

The patient reported exposure to live pigs in the week prior to symptom onset. The patient's state of health is favorable. No symptomatic person has been detected to date in his close entourage.

Although the United States has reported more than 475 such cases since 2005, we've seen sporadic human infections with swine variant viruses (H1N1v, H1N2v, H3N2v) around the world, with recent cases reported in Taiwan, Canada, Brazil, Germany, and the Netherlands.
Although H1N2v subtype viruses have been reported in multiple countries, they can vary widely in their genetic makeup, undergoing continuous reassortment (with both both swine and human flu viruses) and antigenic drift as they circulate in swine herds around the world. 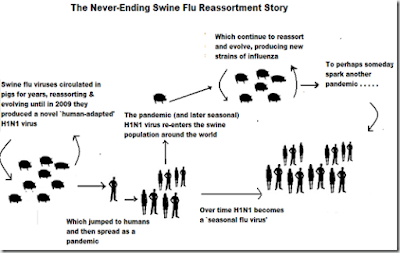 Swine herds are essentially flu factories (see  and are susceptible to a wide range of flu viruses, including avian influenza. For a detailed look at the recent evolution of swine viruses in France, you may wish to review:

Most human infections with swine variant viruses are mild, and do not transmit efficiently from human-to-human, making them hard to pick up with normal surveillance.  Human infection is undoubtedly more common than is reported.

While the CDC's IRAT (Influenza Risk Assessment Tool) lists 3 North American swine viruses as having at least some pandemic potential, the novel flu posing the highest pandemic risk is believed to be a Chinese Swine-variant EA H1N1 `G4' virus, which they rank with the highest (7.5) risk of emergence score, and the 3rd highest impact score, we've seen to date.

Surveillance and reporting on this novel flu out of China is limited, however, although in late 2015, Chen Hualan, director of China's National Avian Influenza Reference Laboratory and the lead author of a paper (see PNAS: The Pandemic Potential Of Eurasian Avian-like H1N1 (EAH1N1) Swine Influenza), publicly stated:

For now, sporadic jumps of swine variant influenza from pigs to humans poses only a minor public health risk.  Most cases are mild, and extended chains of transmission are rare.

But with every reassortment, and every species jump, these viruses are afforded new opportunities to overcome the barriers that have prevented them from becoming a pandemic strain.

And given enough time, the odds are solidly on their side.

Posted by Michael Coston at 5:59 AM