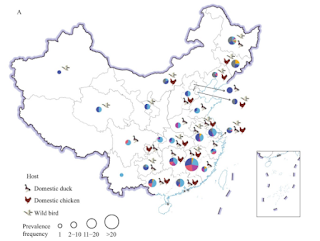 As we've discussed many times, although H5 & H7 avian influenza viruses are of great concern because they can produce exceptional mortality (up to 50%) in humans, all of the human influenza pandemics we know of going back 130 years have been caused by H1, H2, or H3 viruses (see Are Influenza Pandemic Viruses Members Of An Exclusive Club?).

While that doesn't preclude H5N6 or H7N9 from sparking a pandemic, history suggests a return of H2N2, or perhaps H3N8, is more likely (see Everything Old Is Flu Again (Redux)).

When we think of novel H1, H2, or H3 flu viruses, we automatically think of swine variant viruses - since these subtypes are ubiquitous in pigs around the world - and have jumped to humans in the past.  But there are also avian H1, H2, and H3 viruses in the wild as well, and they also have pandemic potential.

Over the summer of 2019, we saw a months-long outbreak of avian H3N1 in poultry in Belgium (see NL AVINED: LPAI H3N1 Updates), while in 2016's A Novel Reassortant H2N8 In China, we looked at an H2 avian flu virus isolated from a domestic duck in Zhejiang Province, Eastern China, in 2013. In 2017, we looked at an avian H2N2 virus isolated in muskrats in Western Siberia.

Clear evidence that avian H1, H2, and H3 viruses continue to circulate, reassort, and occasionally jump species in the wild.

But since  H5 and H7 LPAI viruses are considered to pose the most serious avian flu threats (see OIE Terrestrial Animal Code Article 10.4.1.), these types of outbreaks are rarely given the same level of scrutiny as H5N6 or H7N9.

Yesterday, China's CDC published a rare, detailed, and highly informative overview of avian H3 viruses detected in wild birds and poultry across China, in their CCDC Weekly, a clone of our own MMWR.

They not only report on the widespread nature of these viruses, they find ample evidence of reassortment with some of the more dangerous H5 and H7 avian viruses, which may increase their threat over time.

This is a lengthy report, so I've only posted some excerpts.  Follow the link to read it in its entirety.  I'll have a brief postscript when you return.

Avian influenza viruses (AIVs) are naturally preserved in waterfowls and sometimes spill over to infect humans and mammalian animals. The H3 subtype is one of the most prevalent influenza virus subtypes in waterfowls. Since 2000, H3 subtype AIVs have been continuously isolated from poultry and wild birds in the mainland of China, which implied a dynamic spread in large-scale geography and multiple species. Combinations of H3 with N1–N8 subtypes were reported, among which H3N2 and H3N8 subtypes predominated.
Frequent mutations and reassortments increased the genetic diversity associated with altered virus virulence, transmission, and mammalian adaptation of H3 AIVs, posing a potential threat to animal and human health. This study systematically analyzed the epidemiology, genetic characteristics, and mammalian adaptation-related mutations of H3 subtype AIVs in the mainland of China, facilitating the H3 subtype AIVs research and risk assessment.

Among influenza A virus subtypes, the H3 subtype has a wide range of hosts. In addition to circulating in wild birds and poultry, it can infect multiple species of mammals such as humans, pigs, dogs, cats, horses, and even seals (6). The H3 subtype AIV is LPAIV and one of the influenza virus subtypes with the highest isolation rate among ducks (proportion up to 91.76%) (7). Surveillance data showed that the H3 subtype AIV was widely prevalent in domestic ducks in the live poultry markets (LPMs) in China and reassortants were continuously being detected (8-9).
Genetically, the HA genes of H3 subtype AIVs could be divided into Eurasian and North American lineages. Both H3 lineages were able to cross the species barrier to infect swine, while Eurasian lineage was identified to infect a wider range of hosts (swine, equine, canine, and human) than North American lineage (swine and seals) (10). In China, only the Eurasian lineage has been detected in domestic poultry (11). The interspecies transmissibility of H3 AIVs historically caused the H3N2 influenza pandemic in 1968 (12), which has posed a threat to human health (13).

Here, we systematically reviewed the current situation of the H3 subtype AIVs in China using surveillance data from 82 published studies and summarized the epidemiological and genetic characteristics and the mammalian adaptation of H3 AIVs in the first 20 years of 21st century in the mainland of China.
GENETIC EVOLUTION OF H3 AIVS IN CHINA
H3N2 Subtype AIV

Phylogenetic analysis showed that all of the H3N2 subtype AIVs in China belonged to the Eurasian lineage (11). The HA gene may be derived from viruses circulating in different regions of China and neighbouring countries in East and Southeast Asia (7,17,33), while the NA gene may be derived from other AIVs such as H5 (34-35), H7 (9,36), H9 (23,36), and H11 (34) subtype AIVs in birds in East and Southeast Asia. The prevalence of H3N2 AIVs in birds and frequent reassortments with other AIVs also led to the emergence of various genotypes. Most of the reassortants came from LPMs along the bird migration routes, which suggests that wild bird migration might have a great impact on poultry AIV infection (8,18,23,37). Studies have found that the PA gene of H3N2 subtype AIV of Chinese ducks was highly homologous to the HPAIV H7N9 in Korean wild ducks (33). The H9N2 viruses that were prevalent in poultry in eastern China [Jiangxi (23), Jiangsu (38), Zhejiang (39)] also provided internal genes for H3N2 AIVs. The internal genes of some H3N2 AIVs were closely related to HPAI H5 AIVs, which may suggest reassortment with H5N1, H5N2, H5N3, H5N6, and H5N8 subtype AIVs (8,32,34,40).
H3N8 Subtype AIV

The H3N8 subtype AIVs might be potential gene sources of AIVs causing interspecies transmission. During 2004–2005, researchers detected an H3N8 virus in domestic ducks in Beijing LPMs, of which HA gene was highly similar to the H3N8 virus that caused the 1989–1990 outbreaks in equine populations in northern China (43). In 2018, researchers found that the NA gene of the H3N8 virus isolated from a Guangdong LPM was highly homologous to H10N8 AIV and speculated that the N8 gene originated from the same lineage that caused human infections in 2014 (48).
Other H3 Subtypes AIV

Except for the AIVs of H3N2 and H3N8 subtypes, other AIVs of H3 subtypes were scattered in various regions of China (Figure 1) and had a high degree of genetic diversity and origin. A study indicated that the H5N1 subtype AIV in domestic ducks in Anhui Province and Fujian Province might be involved in the gene reassortment of H3N1 subtype AIV (53). The internal genes of H3N3 might be derived from viruses of waterfowl origin (mainly ducks) in North America (Alaska) and East Asia (Japan and the Republic of Korea) (21-23,39). The HA gene of H3N5 detected in wild birds in Khanka Lake was closely related to poultry-origin AIVs isolated from southern China (21). Studies have shown that H3N6 frequently reassorted with H5N6 subtype AIVs (18,54-55), while PB2 and NP genes were also derived from H9N2 AIV that circulated in the same period (23).

Experimental results showed that the novel H3N6 reassortant could effectively replicate in mammalian cells (54). The gene of H3N7 subtype AIV came from a variety of LPAIVs and had greater antigenic differences compared with the H3 subtype AIV strains isolated from previous studies (56).
(SNIP)
DISCUSSION

The H3 subtype AIVs have continuously circulated in wild birds and poultry in the mainland of China. Wild bird migration and live poultry trade play important roles for virus transmission. Frequent gene reassortments were observed between viruses from poultry and wild birds (52,55-66), which increased the genetic diversity of H3 AIVs and contributed genes to other subtype AIVs such as HPAIV H5 (67-68). Despite the relatively improved surveillance studies having been performed in recent years in China, our understanding of the H3 AIVs transmission and evolution is still limited, especially in intercontinental migratory birds. The H3 viruses could acquire mammalian adaptation mutations during replication. Considering the pandemic history and the potential threat to public health, a long-term systematic surveillance of H3 AIV is imperative.

Like it or not, influenza pandemics come around several times a century. In my 67 years I've been through 3 of them (4, if you count the pseudo-pandemic of 1977, which saw the return of H1N1 after 20 years).

COVID will certainly not be the last pandemic to visit itself upon mankind, and if predictions are correct (see PNAS Research: Intensity and Frequency of Extreme Novel Epidemics), they are likely to occur more frequently in the future.

It is not unreasonable to expect that we could see another pandemic in my lifetime, and while it might be mild - like H1N1 was in 2009 - there are no guarantees that it couldn't be worse than COVID or even 1918.

Sadly, recent history has shown how unprepared we are to deal with a severe pandemic.  Which is why - in addition to beefing up our surveillance for novel viruses - we need to be preparing seriously for the next global public health challenge that will surely come our way.

And right now, I see little signs of that happening.

Posted by Michael Coston at 8:59 AM