Are Influenza Pandemic Viruses Members Of An Exclusive Club? 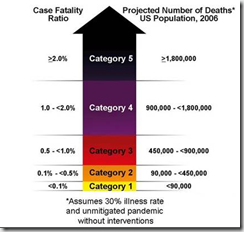 While we watch novel avian flu strains like H5N1, H7N9, H9N2 and new upstarts like H10N8 for signs they might better adapt to humans and someday start a pandemic, there is a school of thought the holds that only H1, H2, and H3 influenza viruses have ever been known to spread efficiently in humans, and we ought to be looking more at that pool of viruses, than avian strains.

The caveat being that our knowledge of what flu strains have infected, and spread, in humans only goes back roughly a 100 years.

History suggests at least a dozen `influenza-like’ pandemics occurred in the 400 years prior to the 20th century, but we’ve little to no evidence to suggest what subtypes may have been responsible. 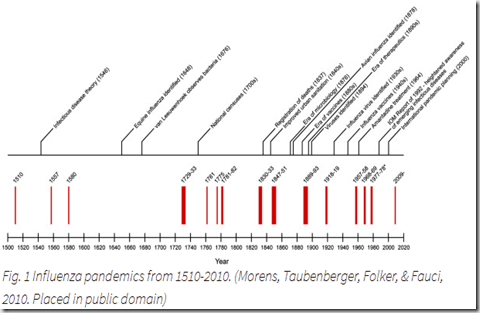 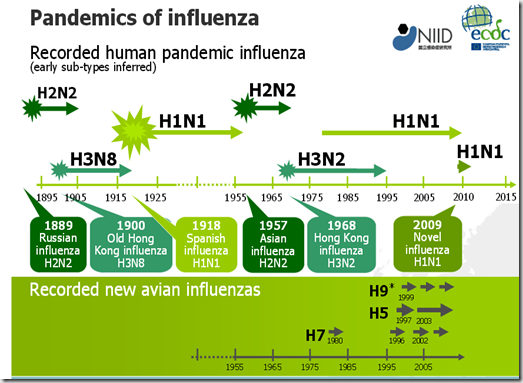 Earlier than that, the 1890-93 `Russian flu’ pandemic has generally been ascribed as to being caused by H2N2 virus, while the H3N8 virus has been tentatively pegged as causing the 1900 epidemic (see Transmissibility and geographic spread of the 1889 influenza pandemic).

While none of this means that an H5 or an H7 virus couldn’t adapt to humans (or hasn’t in the past), it does make one perk their ears anytime we see a novel H1, H2, or H3 influenza virus emerging in the wild.

And in recent years – probably mostly due to better testing and surveillance – we have seen a number of these H1-H3 viruses appear.

Back in 2007 (see The Reassortment Tango) I wrote about the discovery of a mammalian-adapted H2N3 virus, isolated in swine at two separate Missouri farms in 2006. Previously, the H2N3 virus had only been known to infect birds, and this was the first detection of an H2 influenza virus in a mammalian host since 1968, when the human H2N2 virus was supplanted by the the H3N2 pandemic virus.

This is important as those born after 1968 are likely to have little immunity against an emerging H2 virus.

In 2012, a PLoS One article (Recently Emerged Swine Influenza A Virus (H2N3) Causes Severe Pneumonia in Cynomolgus Macaques) found this swine H2N3 produced greater pathogenicity in a non-human primate than did the human H2N2 virus.

Over the past five years we’ve also been watching the evolution of several swine variant viruses (H1N1v, H1N2v, H3N2v) , all of which have reassorted with - and picked up the M gene segment from – the 2009 H1N1 virus (see Keeping Our Eyes On The Prize Pig).

Although the actual number of human swine variant flu infections that occur each year is unknown, the CDC has reported 1 or 2 cases each year since 2005. In 2010, that number jumped to 8, and in 2011, to 12. During the summer of 2012 more than 300 cases were recorded across the United States, and nearly all were linked to contract with pigs displayed at county and state fairs that summer.

Swine are highly susceptible to a variety of flu viruses (human, swine, avian) - and are viewed as excellent `mixing vessels’, allowing viruses to reassort into new hybrid strains, a topic well covered by Helen Branswell a few years ago in a SciAm article called called Flu Factories. 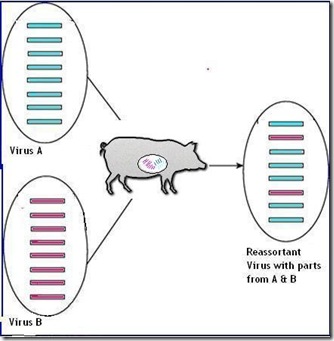 Some of my earlier blogs on swine variant influenza include: H3N2v: When Pigs Flu , You Say You Want An Evolution? & The (Swine) Influenza Reassortment Puzzle while just over a week ago we looked at J. Virol: Continued Reassortment Of Swine Flu Viruses With Genes From pH1N1 In China

But of course, it isn’t just pigs that can host, and reassort, H1, H2, and H3 flu viruses.

Among the more exotic hosts, last month we looked at Equine H3N8 In Mongolian Bactrian Camels, while in 2011 we saw a major die-off of seals in New England, that was eventually traced to a new mammalian adapted influenza virus mBio: A Mammalian Adapted H3N8 In Seals.

Of greater concern, however, are birds and companion animals, both of which tend to mix and mingle not only with their own kind, but with humans and other species capable of hosting flu viruses.

Last April, the journal Biomed Environ Sci. carried a report on ` A novel reassortant H2N3 influenza virus isolated from China’ from a live poultry market in Guangdong province in 2009.

A novel avian-origin reassortant H2N3 influenza virus was detected in a live poultry market. Its potential impacts and evolution should be closely monitored.

While last Last December, in H2N2: What Went Around, Could Come Around Again, we looked at the results of a study conducted by scientists working at St. Jude Children's Research Hospital published in the Journal of Virology, that takes the most detailed look at H2N2 viruses in the wild to date, and concludes that this virus could well pose a threat to humanity again.

While generally regarded as being less susceptible to influenza than either birds or pigs, companion animals like dogs and cats are also viewed as potential `mixing vessels’ as well (see Study: Dogs As Potential `Mixing Vessels’ For Influenza).

In Interspecies Transmission Of Canine H3N2 In The Laboratory, we saw another study that showed that cats (and to a far lesser degree, ferrets) were susceptible to the recently emerged Korean canine H3N2 virus.


If the H1, H2, H3 human pandemic exclusivity club does indeed exist, then one could logically conclude that the next human pandemic ought to come from an H2 strain.   And there appear to be a lot of options circulating in the wild.

The idea is taken seriously enough that in 2011, in  Nature: A Preemptive H2N2 Vaccine Strike?, we looked at a bold proposal by Gary J. Nabel, Chih-Jen Wei & Julie E. Ledgerwood to Vaccinate for the next H2N2 pandemic now.

Like the proposal made earlier by  Dr. Klaus Stohr (see The Prime Of Our Lives), supporting the idea of global pre-pandemic vaccination against H5N1, this idea hasn’t gained much traction – primarily because trying to guess the next pandemic strain is such a crap shoot.

Despite the pattern of H1, H2 & H3 hemagglutinin viruses causing pandemics over the past 130 years, I wouldn’t be too quick to rule out the possibility that an H5, H7, or H9  (or other exotic combination) might spark the next pandemic.   As Yogi Berra famously pointed, out – Predictions, particularly about the future, are always difficult.

The point of this Saturday morning ramble is that we don’t have to wait for an exotic avian strain to somehow figure us out and adapt to human physiology - we could just as easily be hit by a `retread’ of a previously seen humanized virus -  much in the same way as we did in 2009 with the H1N1 pandemic.

And with so many avian, swine, canine, equine, and other hosts out there mixing and matching flu genes, we can’t assume we have another 30 years until the next pandemic.

Which means maybe it is time to start talking seriously again about  pandemic preparedness – for governments, businesses, communities, and individuals.

For some of my earlier blogs on  pandemic planning, and preparedness, you  may wish to revisit: