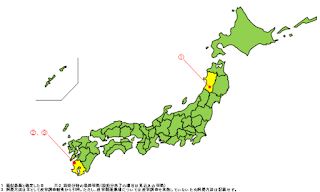 #16,320
Two days after reporting their first outbreak of the 2021-2022 avian flu season, Kagoshima authorities announced a second infected farm, and have reportedly identified the virus as the H5N1 subtype - which differs from the (H5N8) outbreak reported last week in Akita Prefecture.
A (translated) excerpt from the report follows:

Pseudo-patients of highly pathogenic avian influenza in Izumi City, Kagoshima Prefecture Confirmation (3rd case in Japan)
November 15, 3rd year of Reiwa (Monday)
Highly pathogenic avian influenza at a poultry farm in Izumi City, Kagoshima Prefecture, on Monday, November 15, 3rd year of Reiwa.
There was a report that a pseudo-patient of Nza was confirmed. In response to this report, the area around the outbreak farm we will strengthen the surveillance of wild birds by designating the area within a radius of 10 km as a priority area for wild bird surveillance.
1. 1. background

November 13 (Sat) ・ From the outbreak farm on November 13 at a poultry farm in Izumi City, Kagoshima Prefecture Inspection started at a farm within 3km.

November 14 (Sun) ・ Bird flu on another farm by inspection within 3km from the outbreak farm Suspicion of Enza occurred. As a result of a simple inspection by the prefecture's livestock quarantine officer, I was informed that it was found to be positive for type A bird flu (*).

November 15 (Monday) ・ PCR inspection by Animal Health Research Division, National Institute of Animal Health as a result of the implementation of H5 subtype, highly pathogenic avian influenza confirmed that it is a pseudo patient.

While the official reports do not indicate the H5 subtype, a media report from NHK news quotes government officials as identifying the virus as the H5N1 subtype.

The avian influenza virus detected at a poultry farm in Kagoshima Prefecture was found to be a highly lethal, highly pathogenic "H5N1 type" by analysis by a national research institute. It is a different type from the virus detected at poultry farms in Akita Prefecture, and experts say that the virus was introduced by multiple routes along the route of migratory birds, and prepare for the spread of infection all over the country. I am appealing for the need.

Avian influenza virus was detected in chickens at a chicken farm in Izumi City, Kagoshima Prefecture on the 13th of this month, and when a national research institute investigated it in detail, it was confirmed to be highly pathogenic "H5N1 type".

According to the Ministry of Agriculture, Forestry and Fisheries, the H5N1 virus has been found in quails and wild birds in Europe as well as in Germany and the United Kingdom since last month, accounting for nearly 80% of the bird flu reported worldwide this season.

Although knowing the AI subtype is important, it only tells us part of the story - as within each subtype are multiple clades - and each clade can have different characteristics, and host ranges.

There are huge differences in the threat between the `Asian' H5N1 virus that ravaged poultry farms - and infected (and killed) hundreds of people during the first decade of the 21st century - and the `European' H5Nx 2.3.4.4b viruses that are currently spreading across the globe.

At this point, it isn't entirely clear what version of H5N1 has arrived in Japan.  Both are serious threats to poultry, but so far, the European H5Nx virus has shown only a limited health threat to humans.   That could change, of course (see  CDC Adds Zoonotic Avian A/H5N8 To IRAT List).

Meanwhile, in Europe, we continue to see reports of multiple outbreaks of avian influenza in wild birds, and poultry, practically on a daily basis (see DEFRA: Rapid Risk Assessment on Incursion of H5Nx HPAI).

Posted by Michael Coston at 9:30 AM