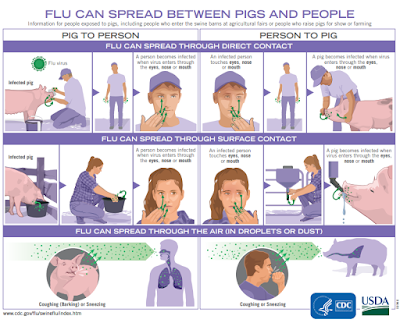 While reports out of Canada have been relatively rare, the United States has reported 483 cases over the past dozen years, including 14 during the 2020-2021 flu season, and two more since the start of the 2021-2022 flu season in October (see CDC FluView Week 46: Another Novel Flu (H1) Variant (Oklahoma) While Seasonal Flu Slowly Climbs).

These spillover infections are thought to be more common than we know, but most mild flu cases go untested, and are unlikely to be picked up by surveillance.  Human-to-human transmission has been reported, but only rarely.

Yesterday Manitoba announced their 4th case of 2021, this time involving H1N2.  While this appears to be an isolated case, with the patient reporting direct contact with swine prior to falling ill, the incidence of novel flu detections in Canada has increased this year.

Health officials advise the detection of these cases could be occurring for a number of reasons including that increased respiratory surveillance for COVID-19 and influenza has been occurring during the pandemic. It is also possible that there is a true increase in the number of these cases, possibly occurring from exposure to infected pigs or through subsequent, limited human-to-human transmission.

While we watch the more exotic (and often deadlier) spillovers of H5 & H7 avian flu closely, over the past 130 years all influenza pandemics have sprung from the H1, H2, or H3 subtype (see Are Influenza Pandemic Viruses Members Of An Exclusive Club?) - and as we saw with the H1N1 pandemic in 2009 - some of those have come from swine.

As a result, we follow swine variant infections closely.

Manitoba Agriculture and Resource Development advises a new case of a variant H1N2 (influenza A) flu virus has been identified. The case has been reported to the Public Health Agency of Canada in accordance with international health regulations.

This human influenza A(H1N2)v appears to be an isolated case. The current assessment is that there is no increased risk to Manitobans, Canadians or the food supply chain at this time.

The virus was detected in October after the individual independently sought testing after developing an influenza-like illness. The individual experienced mild symptoms, was tested and then recovered. The test came back negative for COVID-19, but was later identified as a case of human influenza A(H1N2)v through regular influenza surveillance processes.

The individual had direct exposure to pigs. Based on available evidence, the current assessment is that there is no increased risk to people, with no evidence of human-to-human transmission at this time.

The virus is not a food-related illness. It is not transmissible to people through pork meat or other products that come from pigs and there is no risk associated with eating pork.

Health officials, in conjunction with Manitoba Agriculture and Resource Development, have performed a public health investigation to determine the source of the virus and have not identified any further spread. The province will also continue working closely with the Public Health Agency of Canada and other partners across Canada to share information about this case.

Anyone who works with pigs or poultry, has influenza-like symptoms and is seeking testing or treatment is reminded to identify themselves as an agricultural worker to medical officials including at COVID-19 testing sites. This will help to identify any potential additional influenza cases.

Sporadic human cases of variant influenza have been reported over the past decade in North America. Human influenza A(H1N2)v is rarely seen in humans. One case was reported in Alberta in October 2020 and one in Manitoba in April 2021.

In most cases, variant flu viruses have not shown the ability to spread easily and sustainably from person to person.

Health officials advise the detection of these cases could be occurring for a number of reasons including that increased respiratory surveillance for COVID-19 and influenza has been occurring during the pandemic. It is also possible that there is a true increase in the number of these cases, possibly occurring from exposure to infected pigs or through subsequent, limited human-to-human transmission.

The increased respiratory surveillance currently done for COVID-19 and influenza allows Manitoba to continue to monitor for any new cases.