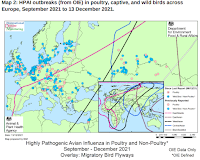 The news earlier this week that the UK had detected their first human infection with the H5 virus currently sparking an avian epizootic across much of Europe was not unexpected, given similar events in Russia and in Nigeria over the past year, and recent warnings (see ECDC/EFSA Raise Zoonotic Risk Potential Of Avian H5Nx) issued by public health agencies.

Despite designated with the same subtype, the H5N1 virus currently spreading across Europe is not of the same lineage as the more dangerous Asian H5N1 virus which has caused hundreds of human infections over the past 20 years, and carries a 50% CFR (Case Fatality Rate).

Nor are these European H5Nx viruses closely related to the HPAI H5N6 virus, which has caused dozens of infections over the past year in China.

But these European H5 viruses have shown an increased ability to jump species in recent years (see CDC EID Journal: Encephalitis and Death in Wild Mammals at An Animal Rehab Center From HPAI H5N8 - UK), and could someday pose a greater risk to public health than they do today.

The ECDC has published a brief synopsis of the UK case, and their current risk assessment, in this week's CDTR (Communicable Disease Threats Report).

Opening date: 7 January 2022 Latest update: 7 January 2022
Epidemiological summary
On 6 January 2022, the UK Health Security Agency (UKHSA) notified of a confirmed case of avian influenza A type H5 in a person in the South West of England. The UK HSA reports that "The case was detected after the Animal and Plant Health Agency (APHA) identified an outbreak of the H5N1 strain of avian flu in their flock of birds. Their infection was identified through the routine monitoring which is conducted on anyone who has close contact with infected birds. The infected birds have all been culled."
The UKHSA swabbed this person and detected low levels of influenza. Further laboratory analysis revealed that the virus is of the µH5¶type, found in birds. It has not yet been possible to confirm that this is a H5N1 infection (the strain that is currently circulating in birds in the UK). The person was in very close and regular contact with a large number of infected birds, kept in and around their home for a prolonged period.
All contacts of the case, including persons who visited the premises, have been traced and there is no evidence of onward transmission. The individual is currently well and self-isolating.
The UK has recently seen a large number of outbreaks and incidents of avian influenza in birds across the country of the H5N1 strain and the APHA and the UK¶s Chief Veterinary Officer have issued alerts to bird owners. Source: UK HSA Press Release
ECDC assessment
This is the first human case of this strain in the UK. No human-to-human transmission has been detected in this event. Currently, there is a large number of avian influenza outbreaks in birds across Europe. Human cases are to be expected and ECDC, together with EFSA and EURL colleagues have raised awareness among clinicians around avian flu infection (please see published commentary for more information).
Specific to A(H5N1): Human cases related to the avian influenza A(H5N1) virus could occur in regions where A(H5N1) is endemic in the poultry population (Asia, Africa, and the Middle East). Current epidemiological and virological evidence suggests that A (H5N1) viruses have not acquired the ability to transmit from human to human, thus the likelihood of sustained human-to-human transmission is low. This is the first human case due to A (type H5) to have been reported in Europe.
The risk of zoonotic influenza transmission to the general public in EU/EEA countries is considered to be very low. Direct contact with infected birds or a contaminated environment is the most likely source of infection and the use of personal protective measures for people exposed to dead birds or their droppings will minimise the remaining risk.
Actions
Epidemic intelligence is closely monitoring this event and will report as soon as further relevant information becomes available.
A summary of ongoing avian influenza outbreaks can be found on this webpage.
Furthermore, ECDC monitors avian influenza strains through its influenza surveillance programme and epidemic intelligence activities, and in collaboration with EFSA and the EU reference laboratory, in order to identify significant changes in the virological characteristics and epidemiology of the virus. ECDC, together with EFSA and the EU reference laboratory for avian influenza, produces a quarterly updated report of the avian influenza situation. The most recent report was published on 22 December 2021.

Posted by Michael Coston at 8:05 AM